Ron Howard’s The DaVinci Code, which screened for the press Tuesday night at the Salle Debussy, has its intriguing moments. But it’s a fairly flat sit. A camera crew came up to me after the screening and I said, “It’s not that deep. In fact, it’s not that good. In fact, it’s kind of plodding. In fact…”
I shrugged my shoulders and said it wasn’t painful, because it isn’t. But it sure as hell doesn’t lift off the runway. I didn’t hate it, but I was never that aroused. 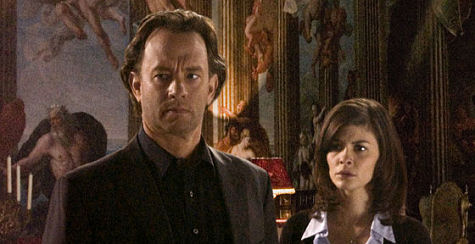 I can see devout Christians seeing it this weekend out of natural curiosity, or maybe to piss themsleves off. I can see it hooking those who aren’t hip to the story. (There must be a few people who don’t know it.)
It has a few chases, a couple of killings, one or two 180 character turns…but it’s Howard’s worst film since Far and Away.
< ?php include ('/home/hollyw9/public_html/wired'); ?>
The story is about a massive coverup, but Columbia Pictures’ decision not to screen it until tonight was a coverup also. A smart one. They knew (even if they don’t admit it) that critics would piss on it and there was nothing to be gained, etc.
The fact that it’s a faithful translation of a pulp best-seller will satisfy many millions, I realize. But it doesn’t doesn’t do what Clint Eastwood’s The Bridges of Madison County did for Robert Waller’s novel, or what Coppola’s The Godfather did for the original Mario Puzo novel.

The DaVinci Code is basically a very brainy Hardy Boys or Nancy Drew-styled mystery movie that gradually leads to a debunking of the myth of Jesus Christ’s divinity, and a corresponding salute to the power and spiritual connectedness of women…two in particular.
A critic friend was calling it tedious and boring, but it’s not that bad. It putters along and does the thing that the 50 million people who’ve read Dan Brown’s novel are probably expecting it to do.
For all the controversy and anti-Christian establishment stuff and the discussion of Jesus and Mary Magdeleme’s relationship and their having had a daughter it’s just not that echo-y, and it’s talky as shit for two and a half hours. Sifting through clues, seeing past the obvious…wait, another clue! How could I have missed that?
There’s a pretty good explanation-of-the-biggest-coverup-in-history scene that Ian McKellen (doing his usual rascally eccentric nutter thing) pretty much nails on his own. McKellen! Boss man!

Tom Hanks does a decent job — he’s a very likable and self-assured actor — and is good at maintaining his dignity and handling some fairly clunky dialogue at times. (Akiva Goldsman has to take some responsibility.) Audrey Tatou handles herself fairly well in the awkwardly-written role of Sophie. Better than I thought she would, I mean.
Paul Bettany as a maniacal, self-flagellating Opus Dei whack job in monk’s robes gets very trying after his first couple of scenes. (It may be those Alaskan husky contact lenses he’s wearing.) Jean Reno plays the world’s most boringly obsessed, one-note Parisian cop.
There’s a big surprise that I won’t divulge, but anyone who doesn’t guess it at least an hour before it comes isn’t paying attention.
I can report that when the big surprise is divulged (by Hanks, in a single line of tepid, on-the-nose dialogue), the smarty-pants audience laughed.
It was the only laughing-at-the-movie moment, but when I heard the chuckles and guffaws, I knew. This movie is going to be toast with discriminating movieogers as the word starts to get out and it moves along into the second and third week. It’s not going to make money hand over fist with urban blues after the initial curiosity surge. 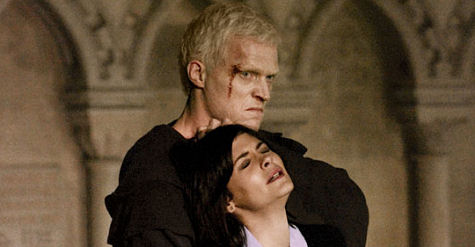 We all know DaVinci is going to make a shitload this weekend — $60 million, $70 million. Everyone has decided to see it and that’s that. A lot of people are pretty taken with mysteries and a lot of them are devout Christians. But even the die-hards are going to say to themselves, “Man, this movie is not cooking.”
There was zero applause when it ended, and very few stayed in their seats to watch the credits.
It’s 1:30 a.m. Wednesday and I’m whipped — I have a headache and my vision is hazy-misty from fatigue and my ass hurts from sitting on a too-low, too-hard couch — but I wouldn’t sleep very well if I didn’t tap something out.
The screening ended two and a half hours ago, or about 11 pm. The press rooms are closed at that hour, so I had to scrounge around Old Town for an hour before I found a working wi-fi location. I went to two places that claimed to have good wi-fi but didn’t…pain in the ass.