Edward Rothstein says in his N.Y. Times review of Jack Sullivan‘s “Hitchcock’s Music” (Yale University Press) is well observed, but when are the Times guys going to wake up and run music links (like this one, say, and this one also) with reviews of this sort? 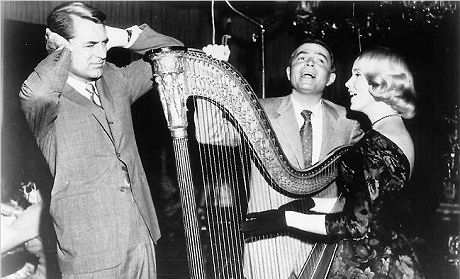 “Hitchcock, without ever drawing a line between the popular and high arts, explored his chosen genre with a firm belief about the powers of music,” Rothstein writes. “Music can provide an archetype for Hitchcockian suspense. Music can hint at more than it says; it can unfold with both rigorous logic and heightened drama; and despite all expectations it can shock with its revelations.
“Sullivan’s book suggests that Hitchcock’s musical faith was more profound than any he could have had about people. And this faith was shared by a generation of film composers who worked with him and were also √É∆í√Ç¬©migr√É∆í√Ç¬©s to the United States in the 1930s and ’40s, including Erich Korngold, Miklos Rosza and Dimitri Tiomkin.

“Despite the events they lived through (which provided their own form of menace and resolution), they shared a conviction that the culture of music had such power that it could match the increasing dominance of film. It could stand in confidence alongside it, knowingly alluding to ambiguities, complexities and multiplicities that not even Hitchcock’s heroes could entirely figure out before the films’ end.”