On Friday, 9.25, Tatiana polled the readership of a Facebook site called “Russians in Los Angeles”, which has over 19,000 followers. (Try not to be confused about the fact that there’s another Facebook site with the same handle.) Her question was aimed at Russians with U.S. citizenship who can therefore vote. Many respondents have been living in this country for more than 30 years, Tatiana says.

Question: “Who do you like more in the Presidential race, Donald Trump or Joe Biden?”

I suggested that Tatiana ask this because in a general sense many Americans regard Russians as one of two things — (a) pro-Trump social media agents or potential U.S. election saboteurs, or (b) people who are traditionally or temperamentally receptive to to the exertions of a strongman autocrat. I had an idea that her poll might indicate that a cliche or two isn’t valid.

It’s 10:30 pm on Sunday, and Tatiana has so far received a little more than 500 replies, most of them more argumentative than declarative.

So my expectation was wrong. Russian American voters do seem to have a liking for authoritarians, or at least the one currently in the White House. In part because the respondents were rattled by last summer’s BLM protests and want someone to get tough with that. Or so it would seem.

Tatiana has passed along a few reasons and rationales from readers. HE contends that some of these are based on bad information, a blatant defiance of fact, an apparent ignorance of today’s N.Y. Times report about Trump’s taxes and business acumen, and possible low-brain-cell counts:

(1) “The riots and the closing of small merchant businesses are only happening in the cities in which the governors and mayors are Democrats”;
(2) “Vote for Biden if you want riots, if you want to drop to your knees and kiss the feet of BLM, or if you want bigger taxes, but not if you want to stop illegal immigrants and control crime”;
(3) “Biden will move many U.S. workplaces to China”;
(4) “Democrats haven’t controlled the chaos…they’re allowing too much to be destroyed”;
(5) “Los Angeles mayor Gil Garcetti has turned this city into a trash can”;
(6) “Trump can stop the further collapse of the country”. 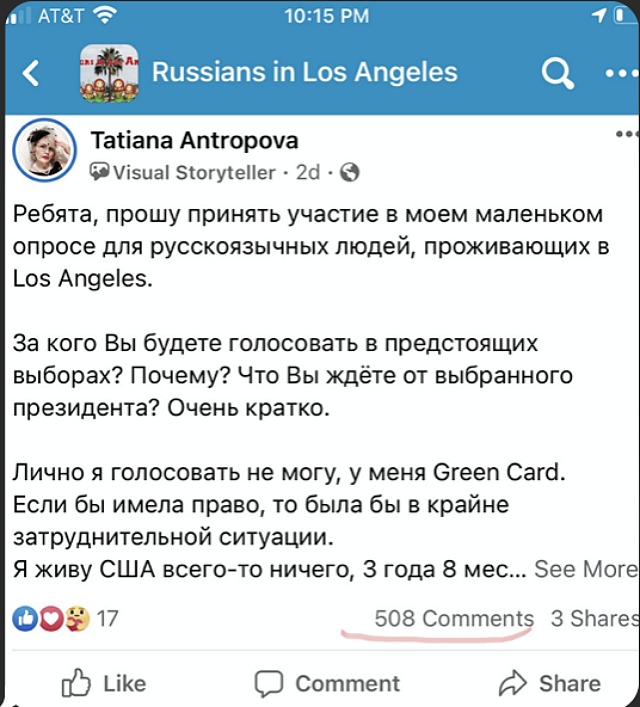