Here’s an intriguing, not-too-flashy trailer for Hollywoodland (Focus Features, 9.8),a noir-like melodrama about the death of George Reeves (Ben Affleck) and the possibility of foul play. It’s supposed to belong to Adrien Brody (he plays a private dick looking into the circumstances) but whatever happens, my hope is that Affleck will get a career bounce out of it. But I’m wondering why we’ve seen no stills of Alleck in that faintly dorky red-and-blue Superman outfit that Reeve wore on the TV series or, even cooler, the black-and-white suit Reeve wore for the show’s monchrome episodes. You know…that posed hands-on-hips shot with his cape billowing and the flag waving? And isn’t it time, by the way, for the film’s official site to be up, less than two months before the opening? 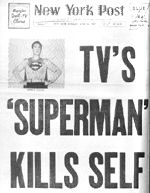