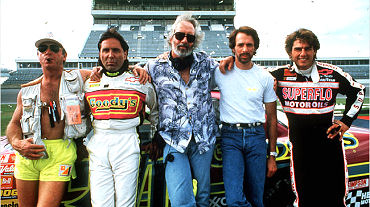 The stink of smugness on the set of Top Car (i.e., Days of Thunder).

An honest look at Bruckheimer would acknowledge the obvious, which is that his action films of the mid to late ’90s had a signature element — super-sexy visuals, sharply-crafted scripts, macho wit, an underlying smarty-pants jocularity — and today that element is gone. If and when some enterprising masochist writes a detailed, definitive Bruckheimer career analysis, the gutting of this mid-to-late Clinton-era Bruckheimer sensibility (which basically came from the residue of Don Simpson’s creative input, which lingered two, three, four years after his death) will definitely be noted. Holson doesn’t even nod in its direction.
The Pirates movies, of course, have been astoundingly successful , and they’ve probably enabled Bruckheimer to help pay for his Gulfstream jet and his Kentucky horse farm, but if they’re about nothing but the empty application of craft — they vacuum the soul and lay waste the spirit. The dollars they’ve earned aren’t clean, like tobacco or cocaine-industry profits; the hosannahs they’ve gotten from people who should know better (like a certain columnist who said they dispense “joy”) are reprehensible.
To what extent, one wonders, is the making of the Pirate trio connected to Bruckheimer’s admitted “fear of failure”? Director Tony Scott (Deja Vu) tells Holson that “Bruckheimer’s exacting standards” — i.e., standards in service of absolutely nothing but financial profit — “come from a deep-seated need to remain relevant. ‘There is a confidence that comes with age, but Jerry is still insecure, as I’m insecure,’ Scott says. ‘The insecurity comes from the fact you think you might lose it. Not the 10 houses or 4 Jaguars. It’s that your confidence might have gone.'”