Fred Claus blows, according to Hollywood Reporter critic Kirk Honeycutt. Won’t matter…never matters! The family audience will fork over for anything Hollywood cranks out as long as it’s kid-friendly and well-marketed with two or three big names. (I often refused to take my kids to crap like this when they were young in the early to mid ’90s. Well, most of the time.) 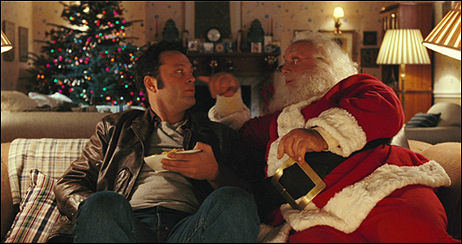 “Even more confounding than this mirthless, misanthropic mess,” Honeycutt writes, “is the involvement of such talented people as Vince Vaughn, Paul Giamatti, Miranda Richardson, Rachel Weisz, Kathy Bates and Kevin Spacey. Holiday films invariably perform well opening week, and the reunion of Vaughn with Wedding Crashers director David Dobkin should give Warner Bros. a momentary holiday lift. It might not last long, though.

“One additional problem: Family films should not clock in at 115 minutes.

“The film isn’t just not funny, it is off-putting. The Claus family confrontations are poorly written, the occasional slapstick action is weakly executed — these look like warmed-over leftovers from Disney’s The Santa Clause series — and below-the-line contributions surprisingly mediocre for a Joel Silver production. With Santa Claus movies like this one, who needs Ebenezer Scrooge?”