In a just-posted N.Y. Post column film critic Kyle Smith praises Ross Katz‘s Taking Chance, currently airing on HBO, as “a work of transcendent sorrow and infinite dignity.” Smith has made no secret in the past of his conservative-minded views, but here he’s right in a more basic sense.

There’s a reason, he says, why Taking Chance was watched by roughly two million viewers during its first HBO airing last Saturday, which is the best for an HBO original flick in five years. It’s paying tribute to America’s Iraq War casualties with an understated economy that’s very respectful and affecting. You’d have to be some kind of emotionally shut-down monster not to feel and realize this — and that’s me talking, not Smith.

This somber drama about a 40ish Marine Colonel (Kevin Bacon) escorting the body of a young soldier killed in Iraq back to his home in Wyoming is everything Smith says it is and more. It’s a low-key reminder of what a terrible thing it is for any young soldier of any nation or cause to end up dead with so much life yet to be lived.

The “more”, however, is what Smith is missing, or pretending to miss. He swipes at me for “taking the Silver Star for snark” for stating my views about the film’s under-agenda. I’m presuming he knows exactly what Taking Chance is “selling” in a subliminal undertow sense, but since he agrees with it, being a righty and all, he’s giving it a pass.

Make no mistake, Mr. and Mrs. America. For all its honor and dignity, Taking Chance is a sneaky Iraq War sell-job in sheep’s clothing.

It may be, as I wrote earlier, “one of the most inspired con jobs of all time in the way it walks, talks and acts apolitical…and yet deep down, it’s a film that will warm the cockles of Dick Cheney’s heart.” 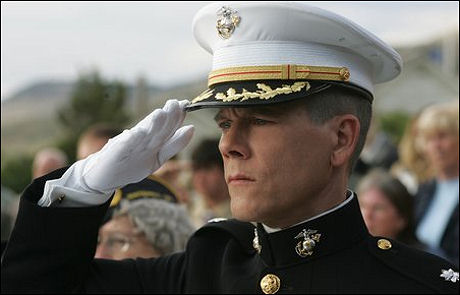 I admire Taking Chance “for the respect and sadness it shows for our fallen dead — don’t get me wrong,” I said in my initial piece about it. Its understated eloquence is very moving, in fact.

But there’s a double deal going on here. You can’t honor a tragically fallen soldier without paying a kind of oblique respect to the conflict he fell in. There’s no separating the two, and the people standing up for this film know this full well. Taking Chance gives voice to red-state sentiments about the valor of war, to wit: if you serve your country by putting yourself in harm’s way, you’re a man of honor. But how can that service be honorable without the war he’s fighting in sharing that same honorific glow? How do your divorce the two? How can they not bleed into one another? At least in the minds of the parents, wives and close friends of those who’ve died.

The under-message of Taking Chance is a very old shell game used by war-minded governments for centuries. Did you love your fallen son or daughter? Then you must honor with a stiff salute the motives of those who put him/her in harm’s way. Oh, and by the way, here’s a nice flag to drape over his/her coffin. So you’ll know how much we care.

This is why I said Taking Chance is “finally about simple grief and dignity in the same way that Scientologists offering free stress tests are just trying to make your day go a little more smoothly.”

It’s all here in the philosophy of Charlie Madison, a character played by James Garner in Paddy Chayefsky‘s The Americanization of Emily (’64). Smith doesn’t mention Chayefsky’s words in his article because…well, who the hell cares about the antiwar views of some Jewish left-wing nut screenwriter? Smith is blowing a special kind of smoke, and he needs to keep it pure. But Chayefsky wasn’t buying this hash even in ’64, before the Vietnam War erupted and the nation split into two camps — the antiwar left vs. the conservative hinterlanders who felt that honor had to be given to a war that had taken so many of its young.

“We shall never end wars as long as we make heroes of our dead and shrines of our battlefields,” Garner says in this key scene. “The fact is that we perpetuate war by exalting its sacrifice. It may be ministers and generals and politicians who blunder us into war, but the least the rest of us can do is to resist honoring the institution.”