It’s been asserted for years by people seemingly in the know that the actual composer of the famously eerie Invaders From Mars score is not Raoul Kraushar, as I’ve stated a few times on HE, but longtime Republic Pictures composer Mort Glickman.

Reporting has it that Kraushar was a Hans Zimmer-like operator and compiler who would hire guys to ghost-write scores, which Kraushar would then take credit for.

I’ve been persuaded that the claims about Glickman may have merit. Okay, that they’re probably legit.

I am therefore apologizing if in fact (as it appears) I have passed along bad intel. Kraushar was apparently not the Invaders From Mars composer, and I apologize for previously failing to report that Glickman, a stocky, bespectacled guy who looked like a 1950s grocery-store clerk and could have played a behind-the-counter colleague of Ernest Borgnine‘s in Marty…Glickman was the maestro! 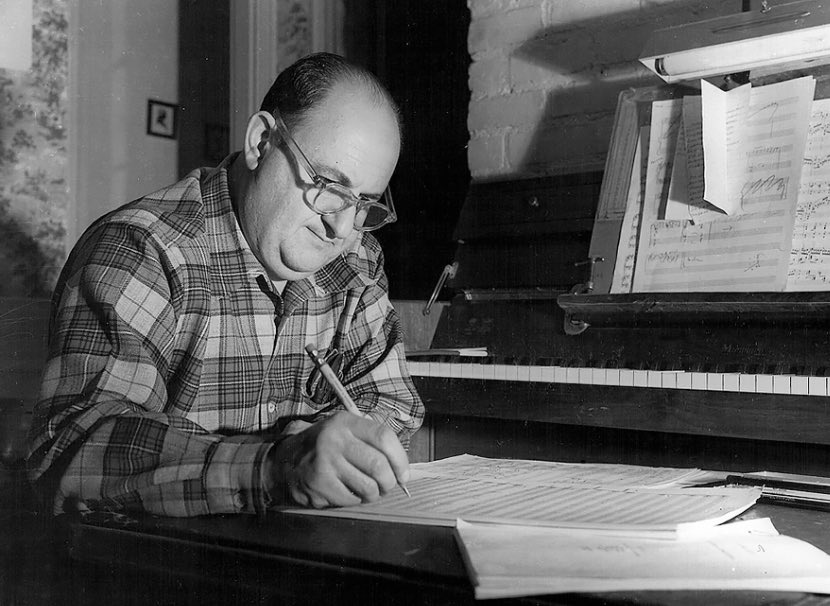 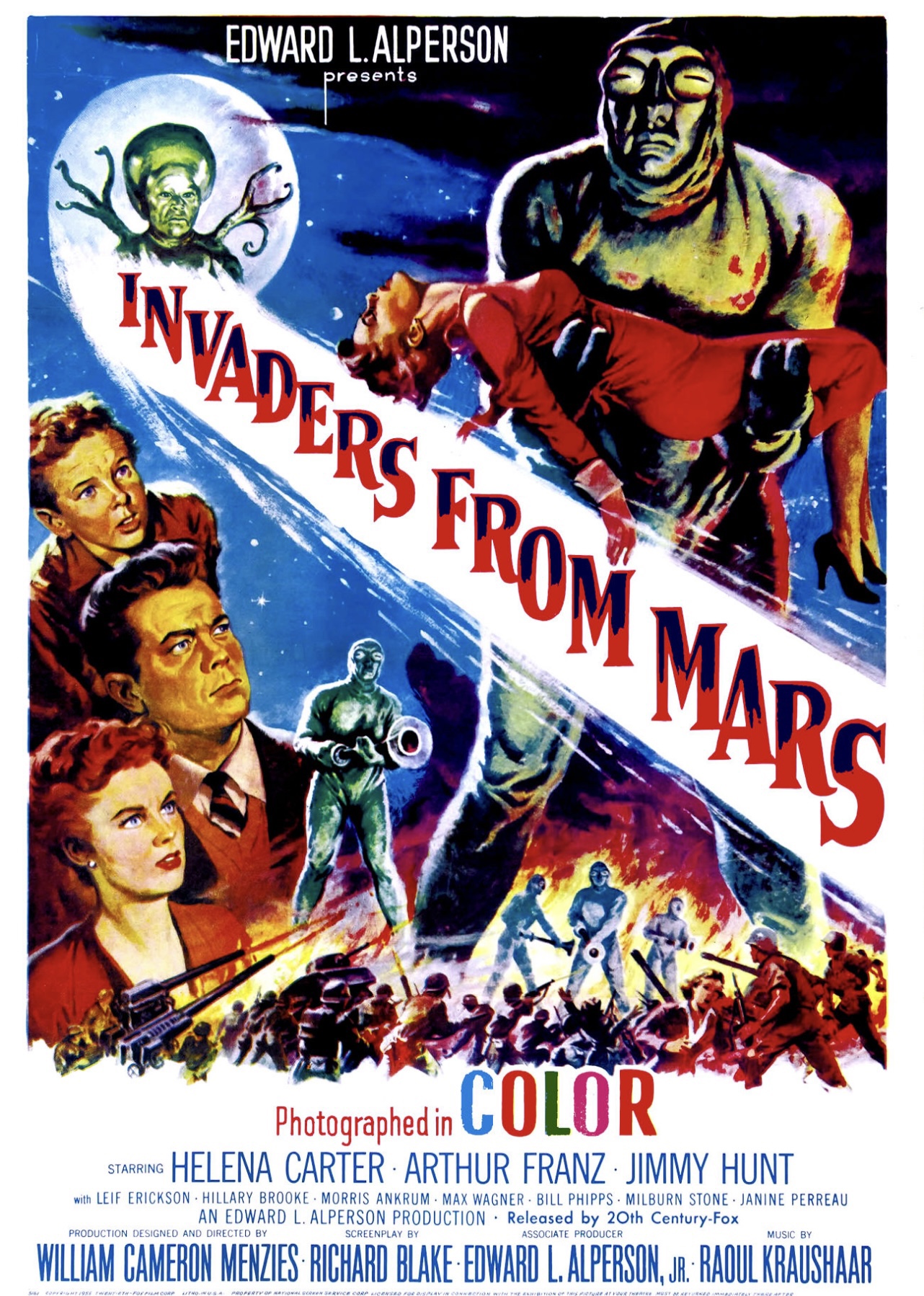 Three people have made the case — (1) David Schecter, co-producer of Monstrous Movie Music, a “series of re-recordings which feature a wealth of classic music from many of everyone’s favorite science fiction, horror and fantasy films”, (2) Janne Wass in a 2016 article for scifist.wordpress.com, and (3) William H. Rosar, author of a 1986 CinemaScore article titled “The Music for Invaders From Mars.”

Rosar excerpt: “Credited to Raoul Krau­shaar, a Paris-born composer who was educated in the United States and began working in films in 1928 as a musical assistant and later music director, the music for Invaders From Mars has frequently been singled out as one of the best 1950s science fiction film scores, its eerie choral arrange­ments and bleak aca­pella ‘conjuring up visions of a dying Mar­tian land­scape or the wailing of fright­ened minds in hell,’ as one reviewer wrote.

“Recently, however, it has come to light through several reliable sources that Krau­shar may not have scored Invaders From Mars at all, but instead only conducted it, the score having been written instead by Mort Glickman, a con­tracted ghost writer.”

The first heads-up came from Schecter, who wrote the following in a 3.31.22 HE comment thread about the restored, soon-to-premiere Invaders From Mars:

“Raoul Kraushaar couldn’t compose his way out of a paper bag. I work in the film music industry and am considered one of the experts in classic sci-fi and horror music. I even spoke to Raoul, who was very good at ‘skirting the issue.’ Kraushaar was notorious for using ghost-writers, and I knew some of the composers who wrote for him, including Bert Shefter (who wrote with Paul Sawtell).

“And all the composers back then knew that Kraushaar wasn’t a composer — he was a ‘compiler.’ It was legal to use ghost-writers, but that doesn’t mean people shouldn’t know the real story.

“Check out [Kraushar’s] obituary, in which one of his offspring said that Kraushaar composed all sorts of things that he OBVIOUSLY didn’t write, as the famous composers who actually wrote them are well-known. And as I said, all you have to do is listen to Mort Glickman’s music to hear Invaders From Mars stuff in his brain long before he wrote this score.

“Glickman also wrote ‘Kraushaar’s score’ for Bride of the Gorilla. I wrote a chapter about that in the Scripts from the Crypt series by Tom Weaver.

“Oh, and there’s a reason the screenplays for both Invaders From Mars and Bride of the Gorilla are in Glickman’s archive at the University of Wyoming. Too bad the music scores aren’t. I almost got them from an executive who worked on the film at Republic, but unfortunately he died weeks before we were going to get together and next thing I knew, his house had been emptied and nobody would respond to requests for what happened to all the music scores that had been there during my previous visit. So sad…” 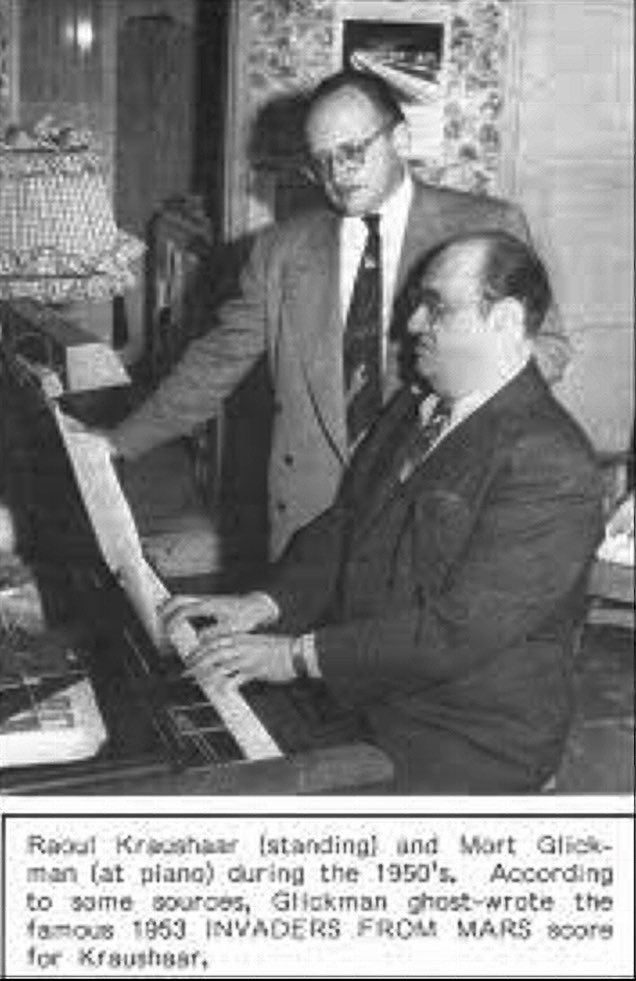 April 2, 2022by Jeffrey WellsNo Comments
« Previous post
What Is Life Without Big Trees?
Next post »
Emoji From Hell