The Globe and Mail‘s Liam Lacey today reiterated the envelope-pushing theme of this year’s Sundance Film Festival — “If you want to get people worked up, you can’t beat the combination of incendiary politics and twisted sex.” Lacey lists seven examples. Quick, without looking…how many can you recite off the top of your head? (There’ve been a couple of Sundance stories already posted in this vein.) 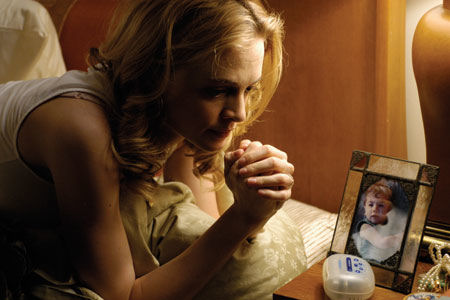 The films are (a) Brett Morgen‘s Chicago 10, “about one of the more inflammatory trials in American history, the 1968 conspiracy trial of the Chicago Seven, [using] music, animation, contemporary actors and archival footage”; (b) Hounddog (a.k.a., untitled Dakota Fanning Rape Project) features the 12-year-old Fanning “as a girl in the 1950s who’s obsessed with the music of Elvis Presley, [and who is] violently raped and appears, at different times, either naked or in underpants.”
Plus Robinson Devor‘s already-immortal Zoo, the “horse-fucking” (or more accurately, “fucking-horse”) doc about a 45-year-old Seattle guy “who made videotapes of himself being anally penetrated by a stallion and died in 2005 after an internal injury”; Adrift In Manhattan, with Heather Graham playing “an unhappy New York optometrist who participates in what Variety describes as ‘an eye-popping sex scene'”; the not-so-hot (according to one critic) An American Crime, a reality-based tale about a deranged woman (Catherine Keener) involved in the hideous torture of an Indiana teenager (Ellen Page); and Teeth, is about a sexually assaulted Christian girl who discovers she has choppers in her vaginal cavity.
“Compared with these,” says Lacey, “the merely obsessive stalker documentary Crazy Love, about a married New York lawyer who has been obsessed with another woman for 50 years, sounds almost romantic.”