A week or two ago I mentioned the possible revival of Hot Shot Movies as a Monday fall film series (early October to mid-December) that would screen the usual unreleased Oscar contenders or above-average movies plus a q & a with a filmmaker. The kicker as far as publicists are concerned is that the next day I would post photos plus an mp3 of the interview plus occasional video footage so everyone would partake in a sense. 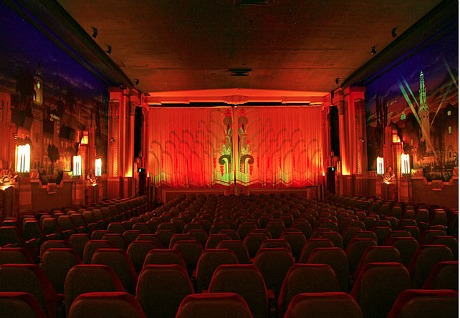 In any event I’ve finally found a venue with a rent that works financially — the Crest on Westwood Boulevard. A well-known venue, well-located, decent parking. The problem is that I’m not sure if I’d attract much more than 125 or 150 people to start with so it’s going to feel funny with so many vacant seats. The trick is to attract more people, and the best way to do that, I’m thinking, is to under-price the competition. So instead of charging $175 for nine screenings (which is what another series is getting) I’ll charge $150 for ten screenings or $15 a pop — cheap. That way I might be able to attract 200 people or more — who knows?

I’d like to go with a smaller, tonier venue (200 to 250 seats with first-rate digital projection) but the rental fees that other facilities are charging are completely unworkable. I don’t know what planet these guys were born on but forget it.

With the launch eight weeks off (I’m thinking of kicking off either on Monday, 10.14, or Monday, 10.7) I obviously have to pull the rigger on this fast. I need to call around, set things up, launch a website, ask a thousand questions. Within a week or so I’ll know for sure if I’m going to pull the trigger.