The hearts of many Los Angeles-based, Hollywood-covering journalists were broken (mine included) this morning when a Michael Cieply N.Y. Times piece reported in today’s edition that Paramount had screened Ben Stiller‘s Tropic Thunder the night before last. 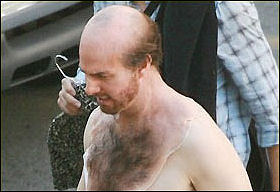 It takes me a while to process these things. I guess I succumbed to a kind of fog or numbness. An hour or so after I first read the article I found myself wandering the streets of West Hollywood, wondering who I was and what my life amounts to if I can’t get into an early-bird screening attended by “several hundred Hollywood agents, managers, publicists and reporters,” for Chrissake.
I called Paramount publicity to kvetch and was told I’m on the list for the next screening. Paramount is planning several, apparently.
Cieiply reported that Tom Cruise “brought down the house with his surprise portrayal of a bald, hairy-chested, foulmouthed, dirty-dancing movie mogul of the kind who is only too happy to throw an actor to the wolves when his popularity cools. The joke being that Cruise was essentially playing Viacom/Paramount honcho Sumner Redstone, who terminated Cruise’ s on-the-lot production deal in August ’06.
Ceiply adds a little rah-rah by declaring that Tropic Thunder is (a) a “raunchfest” and (b) is “shaping up as one of the studio√É¬¢√¢‚Äö¬¨√¢‚Äû¬¢s best prospects for the summer. Besides Cruise, it costars Stiller, Robert Downey Jr., Jack Black, Matthew McConaughey and Nick Nolte.