Ridley Scott‘s Body of Lies (Warner Bros., 10.10.08), the Middle East spy drama with Leonardo DiCaprio and Russell Crowe, is now, according to Scott, being called A House of Lies. Was this announced recently? If so, I missed it. The “A” is unnecessary — just House of Lies will do. Actually it doesn’t. It sounds like a domestic drama about a couple with marriage problems. 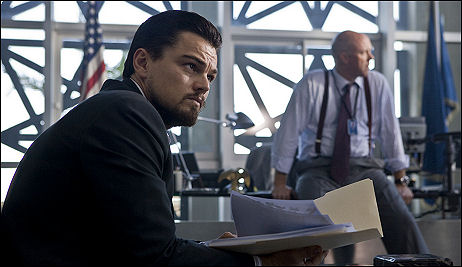 Here’s a portion of a q & a Scott gave to Eclipse magazine’s Scott Essman:
Essman: “You directed Blade Runner and Alien, which are seminal science fiction films. Why have you not done more science fiction films?”
Scott: “I am going to do one. I waited for a book for 20 years and I have got the book. I am not going to tell you what the book is but that film is going to probably be written within the next month. That will definitely be what I do next after Nottingham, the Robin Hood film that I am doing now in England.”
Essman: “Are you working with Russell Crowe again on the Robin Hood film?”
Scott: “I am, I just finished with him and Leonardo DiCaprio on Body Of Lies, which is now going to be called A House Of Lies. It is pretty good. I am very happy with it. In Nottingham Russell is the Robin Hood figure.”
Essman: “Are you still planning to make Blood Meridian?”
Scott: “We got it down as a screenplay and the problem is that it is so savage. But that’s what it is. If you did it properly it would be an X-certificate. But you can’t apologize for the violence and you can√É¬¢√¢‚Äö¬¨√¢‚Äû¬¢t quantify the violence and you shouldn’t try to explain the violence. It is what it is√É¬¢√¢‚Äö¬¨√Ç¬¶an exercise in brutality, savagery and violence. For the most part it is probably relatively accurate. It shows the flipside to Dances With Wolves of how the United States was probably taken. It was taken by the throat.”