Today’s big story is about Madonna inking a deal with Universal to direct a biopic about herself, based on a script co-written by herself and Diablo Cody. Matt Donnelly‘s Variety story says the untiled pic will evolve under the wing of Uni’s filmed entertainment chairperson Donna Langley and producer Amy Pascal, whose shingle is set up on the lot. No casting announcements or production timeline.

This is the first time in history that any big-name talent has announced such an intention. And of course, the idea invites skepticism. Intriguing biopics have to about more than just “this happened and that happened,” and what hope is there, honestly, that Madonna, who’s directed two features, will be interested in conveying some kind of warts-and-all saga about who she is or was deep down? An approach, in short, that might push the usual biopic boundaries.

Official Madonna statement: “I want to convey the incredible journey that life has taken me on as an artist, a musician, a dancer…a human being trying to make her way in this world. The focus of this film will always be music. Music has kept me going and art has kept me alive. There are so many untold and inspiring stories and who better to tell it than me? It’s essential to share the roller-coaster ride of my life with my voice and vision.” 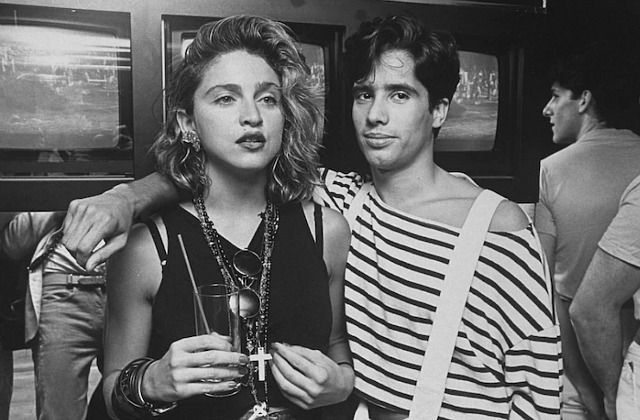 Three or four years ago Madonna made it clear that she was no fan of Elyse Hollander‘s Blonde Ambition, a top-rated Black List script about her struggle to find success as a pop singer in early ’80s Manhattan. I became an instant fan of this script, and declared in a 12.16.16 piece that “it’s going to be a good, hard-knocks industry drama when it gets made — basically a blend of a scrappy singing Evita mixed with A Star Is Born.”

At the very least Madonna and Cody should re-read Blonde Ambition and borrow as much as they legally can from it. Or, better yet, hire Hollander to come aboard as a co-writer.

Blonde Ambition “is a flinty, unsentimental empowerment saga about a tough cookie who took no prisoners and was always out for #1,” I wrote. “No hearts and flowers for this mama-san.

“A Star Is Born‘s logline was basically ‘big star with a drinking problem falls for younger ingenue, she rises as he falls and finally commits suicide, leaving her with a broken heart.’ Blonde Ambition is about a hungry, super-driven New York pop singer who, like Evita Peron (whom Madonna portrayed in ’96), climbs to the top by forming alliances with this and that guy who helps her in some crucial way, and then moves on to the next partner or benefactor, but at no point in the journey is she fighting for anything other than her own success, and is no sentimentalist or sweetheart.

September 15, 2020by Jeffrey Wells60 Comments
« Previous post
If I Was Leslie Neilsen…
Next post »
Submitting To A Long-Forgotten Realm