How To Fix It

My Valkyrie reaction is that it’s…uhm, not too bad. A passable sit, relatively okay, decent enough, I wasn’t in pain. Except it feels as if this World War II-era thriller, about an effort by a group of patriotic German officers to assassinate Adolf Hitler in the summer of 1944, is taking place inside an underground bunker. There’s something muffled and suppressed about it. As Tom Cruise and his co-conspirators go about to trying to bring down the Nazi regime, it just doesn’t feel all that suspenseful. As much as I wanted it to be The Day of the Jackal, it’s not. 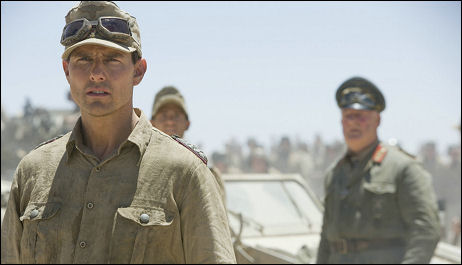 Okay, it’s “interesting” as far as it goes. But I’m sitting in a Manhattan screening room in late 2008 and going, “What does this have to do with me?” And I didn’t say that while watching WALL*E.

But I just figured out how to make Valkyrie work. It’s too late to do anything now, of course, but if Singer and that king-shit, full-of-himself screenwriter Chris McQuarrie had only come to me two or three years ago…

My idea would have been to go the Quentin Tarantino/Inglorious Bastards route and tell the story of Cruise’s Col. Claus von Stauffenberg as a realistic wish-fulfilment fantasy along the lines of Occurence at Owl Creek Bridge .

In other words, show Hitler being killed by the briefcase bomb, the subsequent coup d’etat succeeding, the Nazi higher-ups fleeing for their lives, a truce being struck between the new German government and Allied forces, and Russian troops agreeing to stand down and not invade Berlin. Have it all work out just peachy with Tom von Staufenberg hailed as a national hero…and then jerk the chain 20 minutes before it ends and show that the plot in fact failed, that von Stauffenberg was in fact executed, and so on.

That movie, at the very least, would have held my attention a bit more. 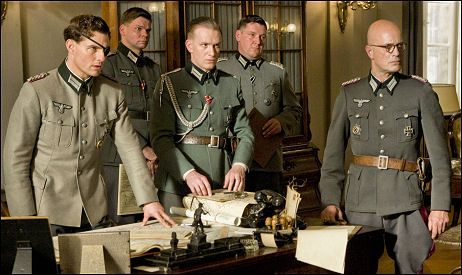 The three biggest problems I had with Valkyrie are (a) I can’t quite accept Cruise as von Stauffenberg — the Jerry Maguire/Vanilla Sky/Mission Impossible factor simply checkmates his believability as a German military guy; (b) I didn’t care for Newton Thomas Sigel‘s mildly drab cinematography (unless there was something wrong, that is, with the projection standards in the bunker-like screening room I saw it in) — I just know that the photography seemed a little murky and shadowed down; and (c) the accents aren’t uniform — Cruise speaks like the right-wing U.S. Senator he played in Lions for Lambs, the British actors speak in their native British accents, the German-born Thomas Krentzman speaks German-accented English, etc.

This last shortcoming is a very important and persistent one. All you need to do if you’re making an English-language movie set in a foreign-language culture (or in an ancient one) is to set up an across-the-board system and have everyone stick to it.

In Vicente Amorim ‘s not-yet-released Good, set in Germany of the 1930s and early ’40s, everyone speaks in British accents — and it works fine. In Edward Dmytryk‘s The Young Lions (1958), the German characters all speak English in German accents — and it’s more or less okay. In Spartacus, all the elite Romans (except for John Gavin‘s Julius Ceasar) speak with British accents, and all the slave warriors speak Americanese. In Oliver Stone‘s Alexander, the Macedonian soldiers speak with Irish accents — and it pretty much works.

But the accents are catch-as-catch-can in Valkyrie, and I found that hugely distracting.