How West Was Mauled

Warner Home Video’s new How The West Was Won, which came out on Blu-ray and DVD last Tuesday, presents the 1963 Cinerama film — the last narrative feature shot in the original three-strip, three-projector process — as a unified, spruced-up, seam-free thing. It’s now just a colorful, sharp, super-wide image — the aspect ratio being something like 2.85 to 1. 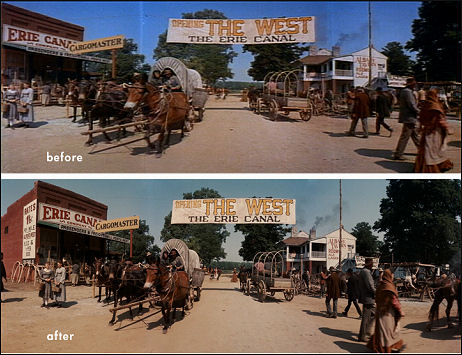 And most DVD/Blu-ray reviewers are calling it a vast improvement over the way How The West Was Won looked on previously released discs, which had the vertical seams showing and the imperfect blending of the three frames plain as hell. But it’s an improvement only in the most bland cosmetic sense. It’s basically a digital reconstitution that erases what watching Cinerama films was really like. (Within the last couple of years I’ve seen This is Cinerama! and How The West was Won shown in the original three-projector process at the Cinerama Dome.)
The old Cinerama seams are not something to avoid but to savor. Or at least accept. They were what they were, Cinerama was what it was, and the process shouldn’t be “upgraded” on Blu-ray and DVD to the point that it doesn’t resemble what it originally loked like. Audiences in 1963 had to cope with these faint visual divides, and they paid through the nose to see Cinerama movies all through the ’50s and early ’60s. This is how present-day audiences should see How The West Was Won also. Clean up the dirt and sharpen the image, fine, but erasing the seams is the same kind of vandalism as the colorization of black-and-white films.
On top of which the right, center and left images were never perfectly aligned, and I say roll with that also. The process was imperfect and so what? The old Cinerama technicians did the best they could with what they had to work with, and their work should be left alone and respected for what it was. 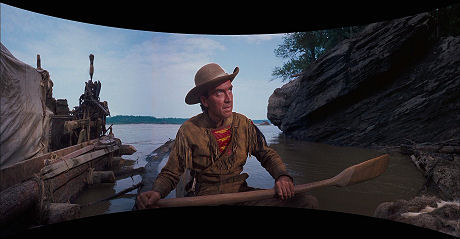 SmnileBox image of James Stewart in How The West Was Won; here‘s a larger image of same. 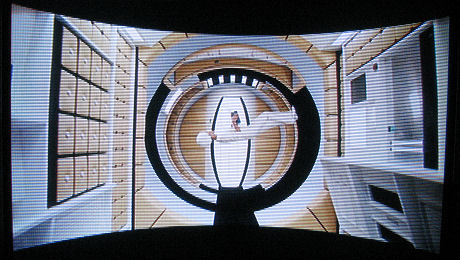 And why not offer an alternate version of all Cinerama films, genuine and fake, in the SmileBox process? And why did WHV decide to offer a SmileBox version of How The West Was Won only on Blu-ray and not on DVD? This is hugely unfair to Luddities like myself who are still watching 36″ Sony flatscreens. Here’s a reaction to the Smilebox Blu-ray version by Some Came Running‘s Glenn Kenny.
SmileBox portions from HTWWW are offered in disc 3, as part of the documentary about the Cinerama process. It gives you a sense of how the film actually looked if you sat front and center at a good Cinerama theatre in the ’50s or early ’60s.
Here’s a little rundown on the SmileBox process.
Every and every film that was ever presented in real of “fake” Cinerama (the single strip 70mm simulation in which widescreen films were projected onto a super-curved Cinerama screen, including It’s a Mad, Mad, Mad, Mad World, Grand Prix and 2001: A Space Odyssey) should be issued on special SmileBox DVDs and Blu-rays.