Three days ago Newser‘s Michael Wolff posted a frankly-written piece about the lack of any real reporting concerning the death of John Hughes. It basically took off the tap shoes and asked “so what really happened to the guy, without the garlands and the birdseed?” Wolff’s conclusion: “The media really does protect its own. Even at the expense of a juicy story.” 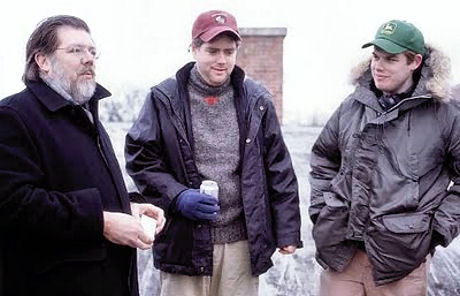 Two days before Wolff’s piece the above photo of a 50 year-old Hughes (taken in 2000) appeared on a blogspot called Northwardho. The headline asked why were only older photos of Hughes (mostly from the mid ’80s) used for obits and none of his older self. Perhaps because Hughes more or less became Howard Hughes over the last 15 years or so?

“Certain deaths do something weird to the media mind and temperament,” Wolff wrote. “John Hughes, a maker of what are essentially genre slapstick films, has, by his early death the other day, become a great auteur and, as well, a saint, without anyone seeming to be remotely nosy about the strange circumstances of his life and untimely end.

“At the height of his career — he was not just one of the most commercially successful writers and directors in Hollywood but a zeitgeist phenomenon — he drops out. Just leaves. Then, last week, at 59, walking on a Manhattan street, he falls down dead. So, come on, what happened to the guy? Can’t anybody write a decent obit anymore?

“Somewhere in here there is obviously a very good story — a more compelling one than the one about the brilliance of Sixteen Candles.

“Possibly herein lies a great moral tale. Did Hughes spurn the movie business for all the reasons we wish someone would spurn it? That would be more meaningful than The Breakfast Club. Or did Hollywood spit him out? Was he too innocent for the place — that would fit his own genre.

“Or was it drugs? Or other personal demons? And dead at 59 on a street corner? I can’t find anyone, in the reports of his demise, who raises much of an eyebrow about this. So…was he overweight? Inquiring minds really do want to know.

“The deference must be noted.

“This intersection of death and pop culture figures is an obviously strange one. Nostalgia turns out to be a more powerful media force than gossip. Where the premature death of a significant pop culture figure used to be an opportunity to examine the nature of fame and accomplishment, now it’s become a semi-mystical event. We pile on the meaning–and the memories.

“It has to do, surely, with being young — when Ferris Bueller’s Day Off actually meant something. It’s our lost youth that we’re treating with such sensitivity.

“It’s Michael Jackson‘s world — where only the culturally tone deaf speak ill of him.

“It’s a sort of moral attention. Somebody who’s had purchase on our emotion, and who dies before his time, enters into some media safe ground. We respect our pop culture dead.

“The media really does protect its own. Even at the expense of a juicy story.”