16 year-old Keisha Castle-Hughes‘ announcement that she’s pregnant by her 19 year-old boyfriend and intends to give birth next year sounds vaguely creepy, yes. I don’t want to speculate how this may affect the reception to New Line’s The Nativity Story (opening 12.1), or if anyone will give a shit one way or the other. 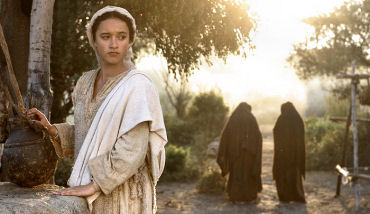 But when you think about it and get beyond the young-girl-having-sex-in-her- early-teens angle, which is common behavior the world over, it’s not that strange.
Most younger people put off coming to grips with the heavy stuff until they’re 30 and sometimes older. This little girl is different. By the general standards of con- temporary western culture Ms. Hughes should be living a free and unencum- bered go-for-it lifestyle for the next 10 or 15 years before buckling down and shouldering the burdens of parenthood, but here she is getting right down to it with a child in her belly five years before her 21st birthday.
Unusual, to say the least. On one level I feel she’s making a mistake; on another she has my respect.