I caught a 9 am screening this morning of Steve McQueen‘s strong and harrowing Hunger, which IFC is releasing sometime next year. McQueen won the Gucci Group Award at the Venice Film Festival a few days ago, and the Camera d’Or at Cannes last May. It was obvious within seconds that he’s a first-rate visual artist, and that the film itself is top-notch — a frank and unsparing chronicle of political torture of IRA combatants by the British, and particularly the plight of Bobby Sands (Michael Fassbender), who died from a hunger strike in 1981 at age 27. 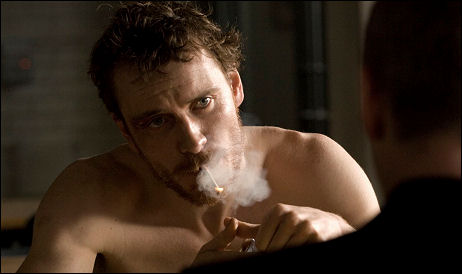 At the same time I wasn’t entirely taken with the slow pace of it, and I was more than a little unsettled by the disgusting particulars of the cell life of the Irish prisoners that McQueen shows during the first half-hour. The blunt, somewhat embarassing truth is that I have a problem with any movie that deals with prominent displays of fecal matter — particularly ones in which said matter is smeared upon prison-cell walls.
I had the same reaction when fecal matter was used for artistic expression in Quills. And I feel the same way about the artwork of Andres Serrano (his recent shit sculptures, the infamous “Piss Christ”). If this makes me a timid, shallow- minded sort then fine, okay…but I won’t absorb art that uses this particular brush, however honestly and honorably intended.
I realize with great chagrin that saying this makes me sound like the kind of person who prefers to watch something like Beverly Hills Chihuahua rather than a raw, blistering portrait of terrible political repression and the nobility of men with the steel to fight for their beliefs and take whatever punishment is meted out. The truth is that I’m a middle-class guy who lives somewhere in the middle sphere — no Chihuahua lover, but unable to stomach what I’ve just described.
May God protect the courageous freedom fighters of the world, and may God make life miserable for the forces of cruelty, torture and repression. And may the talented Steve McQueen move on to greater and hopefully less off-putting subjects in future films.