The problem with The Hurt Locker, in the view of Newsweek‘s Seth Colter Walls, is that it has no political inquisitiveness and is therefore way too opaque. 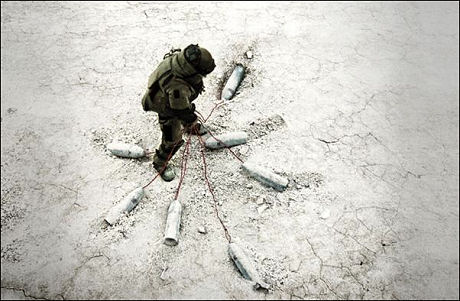 “Artists were put on earth to…give us insight and catharsis, not merely riff on the free-floating tensions that already dominate the mass consciousness,” he says. “The conventional wisdom is that Iraq War films have foundered at the box office because we have no appetite for them, but it might be that our appetite for them has been slight because they offer precious little nutrition. Nearly all of them are telling us pretty familiar war-is-hell narratives, even if those narratives are skillfully rendered in a technical sense.

“The Hurt Locker gives us not only no context but no hint that the context is missing, since it mines the adrenaline of combat without mussing itself in the viscera of anything as dangerous as ideology. It’s a rip-roaring piece of suspense cinema, but decidedly no more than that.”

January 22, 2010by Jeffrey Wells102 Comments
« Previous post
In The Company of Men
Next post »
Looking Good No Longer