Peter Howell‘s rave review of Kathryn Bigelow‘s The Hurt Locker, which will show at the Toronto Film Festival early next week, raises an obvious question: why doesn’t this Iraq War film have a distributor? The answer, of course, is that all Iraq War pics are thought to be box-office poison. But if a film kicks serious combat ass (along the lines of, say, the last 25% of Full Metal Jacket), there should be a market for it, no? 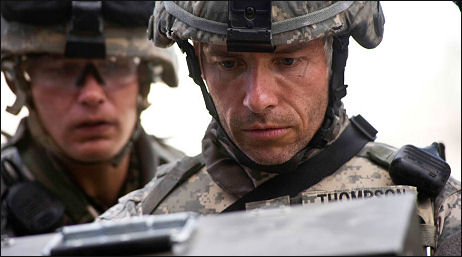 “Just when you think the battle of Iraq war dramas has been fought and lost, along comes one that demands to be seen — if you can handle the raging adrenaline,” Howell begins.
“The Hurt Locker strips the Iraqi conflict of politics and brings it right down to the garbage-strewn pavement, where lives are saved through skill and nerve but lost through bad luck and malevolence.
“The film follows the men of Bravo Company, the elite U.S. army unit tasked with defusing bombs left on Baghdad streets by increasingly violent and determined insurgents.
“The bomb-removal boys have robots and shrapnel-resistant suits at their disposal, but they can’t stop every blast — as we see with devastating impact early on.
“The job ultimately comes down to playing hunches, keeping your cool and staying ever vigilant. If the IED (improvised explosive device) doesn’t get you, the sniper hiding on a nearby rooftop just might. If not on this street, then the next one. 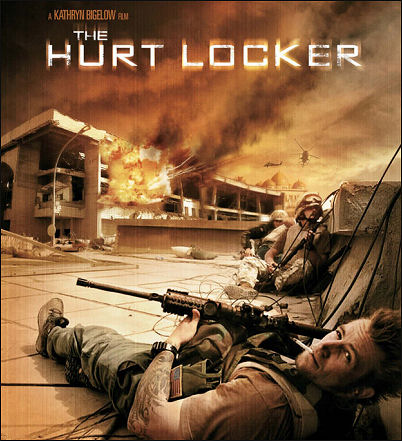 “Gutsy and gung-ho but new to Bravo is a sergeant named James (Jeremy Renner, in a breakout role), a reckless cowboy who has disarmed 873 bombs but is one short fuse away from being blown to kingdom come. He reminds himself of this with a collection of detonators he keeps under his bed.
“His subordinates Sanborn (Anthony Mackie) and Eldridge (Brian Geraghty) are shocked by his methods and not shy about saying so, but are loyal to task and team.
“Testosterone flows non-stop and so does blood, but these macho men are just getting the job done. In so doing, they reveal much about themselves and also deliver some home truths about the Iraqi quagmire. This is no message movie, yet insights abound.
“Bigelow knows the male mind and she’s an ace at action, as she’s demonstrated before in films like Point Break and Strange Days. Now she can add titan of suspense to her laurels.
“If you can sit through The Hurt Locker without your heart nearly pounding through your chest, you must be made of granite.”