I, Daniel Blake Enjoyed A Fair Amount of Respect Until It Won The Palme d’Or

When Ken Loach‘s I, Daniel Blake won the Cannes Film Festival’s Palme d’Or, I posted the following: “WHAT? Wrong call, gents. A good film, but not my idea of a really good one, and a long way from greatness. It’s a sturdy, downish Loach-wheelhouse thing about an older craftsman (Dave Johns) with a heart condition getting the humiliating run-around by the system. Except it’s also about an obstinate fellow who’s more committed to venting frustration than playing the system for his own benefit. It’s a sad tale but the world is full of guys like this.”

On 5.13 I had an argument with a critic friend about Blake, and I posted it later that day:

“A guy who can’t catch a break and won’t help himself. World’s full of ’em. Life is hard but it’s even harder if you refuse to play it smart when the bureaucratic odds are stacked against you. Or any tough odds for that matter. I very nearly died from the grip of a can’t-catch-a-break loser attitude in my late 20s. You have to get hard and act accordingly or life will eat you for breakfast and swallow the bones.”

Critic Friend: “Can’t agree with you about the job. He’s not presented as a lazy man (he WANTS to work), but he’s still recovering. [Plus] that job was in an auto shop and would require lifting, maybe heavy lifting. And that’s the reason it would be dangerous. Also, he’s not a ‘delicate craftsman’ by trade (though he’s capable of that kind of work, as that lovely shelving cabinet he builds makes clear). His real job involved being up on scaffolding. He was a heavy-duty workman, not an artiste.”

Me: “Daniel is described in the synopsis/press notes as a 59 year-old ‘joiner.’ Which is defined as ‘a person who constructs the wooden components of a building, such as stairs, doors, and door and window frames.’ I heard the part about a scaffold in the beginning but nonetheless the press materials call him a joiner so which is it? Joiner sounds like a trade with a certain amount of finesse to me. I missed the part about ‘heavy lifting’ in an auto shop — I doubt if his prospective employer had heavy lifting in mind for a guy of that age. Only a sadist would hire a guy pushing 60 to lift and lug things around.”

Critic friend: “I read ‘joiner’ in the press notes too, and had never heard the term, but I like to go on what’s in a movie rather than the press notes, and what the scaffolding comment suggested was exactly what you said: someone who constructs things like stairs, which sounds like fairly taxing physical labor. That’s really the point, right? And the very nature of working in an auto shop is that you have to lift things.

“But really, why are we even getting into a Talmudic quibble about this point? Daniel Blake is very much presented as a man who would LIKE to do the physical labor he has always done, and he is under doctor’s orders not to (to my mind, with good reason). That’s the premise of the movie. He’s someone who needs government assistance and is being kicked off of it — which happens, in the real world, often enough. He’s not a guy in his 20s who needs to learn to get his shit together (as you describe yourself). Totally different situation.

“I’m not some kneejerk, left-wing, nanny-state apologist, but this is a movie about how our institutions are failing us in a world that, increasingly, squeezes people out. It’s about the fraying safety net: a totally authentic issue that, as I said, crosses borders. It really dramatizes how that works. That’s what I so liked about it: not that it sentimentalizes Daniel, but that it anatomizes what he’s up against. That, to me, is its authentic achievement.” 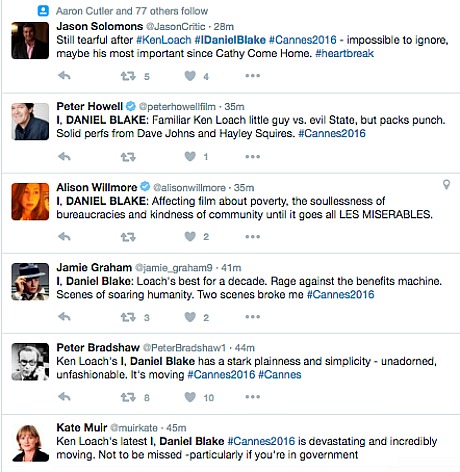