I Paid Money To See Ben-Hur

Last night I caught an 8:10 pm 3D show of Timur Bekmambetov‘s Ben-Hur. Almost everything about it stinks of mediocrity — the tedious writing, the grayish color scheme, the C-grade cast delivering soap-opera performances, the low-budget vibe despite a reported $100 million having been spent. It’s like a 1987 Golan-Globus version of Ben-Hur starring Michael Dudikoff as Judah and Chuck Norris as Messala…it’s third-tier shit, shit, shit on almost every level.

Okay, the chariot-race sequence isn’t half-bad, I’ll admit. But I hate the way it was shot and cut and the sandy, desaturated color scheme. It doesn’t feel bracingly real-world and super-intense like the legendary 1959 version did — too many close-ups, too much CG, too many flying bodies and flying horses and a truly silly bit when Jack Huston‘s Judah Ben-Hur falls out of his chariot and is dragged by his horses for a good 45 seconds or so. But it delivers in a crazy, cranked-up way.

And I was impressed by an underwater sequence in which Huston is struggling to free himself from a chain looped through a leg iron around his ankle — not bad.

But otherwise, this is one of the lowest, cheesiest, scurviest, lemme-outta-here films made or distributed by a major U.S. studio, ever.

When I read about this thing being made two-plus years ago I knew right away it would be crap, and I was right. Ben-Hur is a rank embarassment, a miserable wipe-out that’s expected to reap a pathetic $12 million by Sunday night.

There were maybe 15 people in the theatre, if that. I took two four-minute breaks, once for the bathroom and a second time to buy a hot dog. I didn’t care what I might miss. I knew when the chariot race would be arriving.

Stodgy and slow-moving as it was, William Wyler’s 1959 version was a big-budgety, A-team effort with first-rate, charismatic actors working with a stiffly phrased but well-honed screenplay. It didn’t feel like a genuine visit to ancient Judea and Rome but you didn’t care because it was a pricey, gleaming, well-spoken enterprise from every angle. The newbie has none of that sturdiness, that atmosphere, that panache, that “we know what you want and what we’re doing because we’re rich, classy guys” attitude. It’s from hunger, from Goodwill.

There’s a reason why some actors are regarded as heavyweight X-factor stars, and there’s a reason why guys like Huston just shouldn’t be cast in leading roles in would-be epics. I’m sorry but he just doesn’t have “it.” He gives it hell, he acts his heart out, and he’s the guy who read for the part but didn’t get it. Except he did. 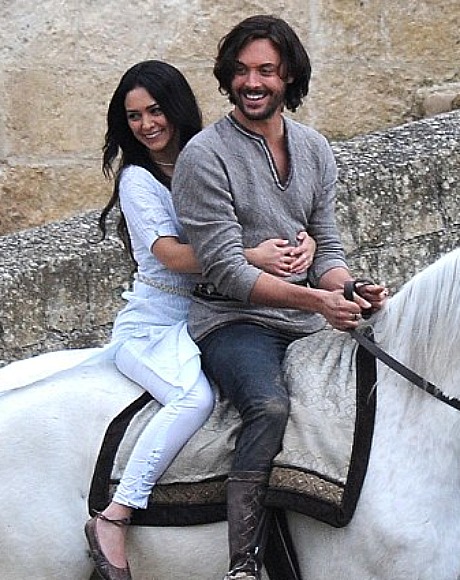 Morgan “paycheck” Freeman is reasonably decent in the Hugh Griffith role, but the rest of the cast…what were the producers thinking?

Toby Kebbell as Messala…a guy who will never, ever be anything more than a third-rater. Nazanin Boniadi as Esther, Ayelet Zurer as Mama Hur, Sofia Black D’Elia as Ben-Hur’s sister, Moisés Arias as a Judean zralot, the Danish-born Pilou Asbaek as Pontius Pilate — I didn’t want to know them, look at them.

If I wasn’t a gentleman I would have spat on the theatre carpet.

You’re sitting there and saying to yourself, “Paramount seriously expects paying customers to emotionally submit to this shit? I don’t care about these losers, these zero-charisma no-accounts strolling around in shitty, half-assed costumes and conversing in ninny phrases that I haven’t the slightest interest in listening to, much less contemplating. Get outta my life, man.”

In a couple of first-act scenes Huston’s Jerusalem wardrobe is like something Tony Curtis would have worn during a banquet scene in The Black Shield of Falworth — a sharp V-necked sweater, tight dark jeans and high lace-up suede boots. Tom Hanks in A League of Their Own: “There’s no crying in baseball!” Jeffrey Wells sitting in the Arclight last night: “Ben-Hur can’t wear tight jeans and a Banana Republic V-necked shirt! This is ancient Judea…come on!”

I was taken with the two ancient Italian villages where they shot a good deal of the film — Gravina di Puglia, Bari, Apulia and Matera, Basilicata. Next time I’m in Italy I’ll be visiting both.

In the 1959 version Ben-Hur escapes the Roman galley ship a little more than three years after being condemned. In the current version he’s been an oar slave for five years before deliverance arrives.

Everyone connected to this thing has lost big-time — Paramount, the studio’s vice-chairman Rob Moore (a devout Christian who strongly supported the project), producers Mark Burnett and Roma Downey, the slovenly Timur Bekmambetov (back to the schlock exploitation dungeon after this), the cast members who are thinking about scratching it off their resumes.

I didn’t stick around for the end credits. I didn’t want to listen to that shitty pop song. 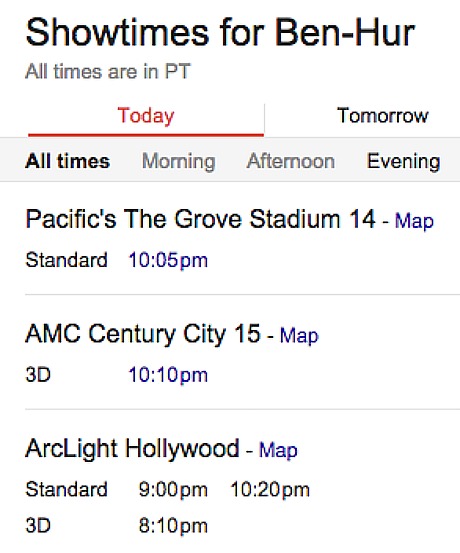 August 19, 2016by Jeffrey Wells45 Comments
« Previous post
My Fully-Charged iPhone Will Be With Me Until I Die
Next post »
Sully Will Be Okay. I Can Tell. Really.