Ice In His Veins

Is there anyone more efficient at throwing shade upon the human condition than Michael Haneke? The white-haired, 70something Austrian director is as brilliant as they come, but he’s one cold surgical fuck. Haneke is a humanist at heart, but there’s something almost Josef Mengele-like about the vibe in his films.

Happy End, his latest, focuses on a wealthy family based in the Calais area, and how their inability or disinterest in getting beyond their insularity and self-absorption has led to a barren environment defined by lies, deception, self-loathing, alcoholism, decrepitude and a persistent longing for death on the part of the 86 year-old George Laurent (Jean Louis Trintignant). 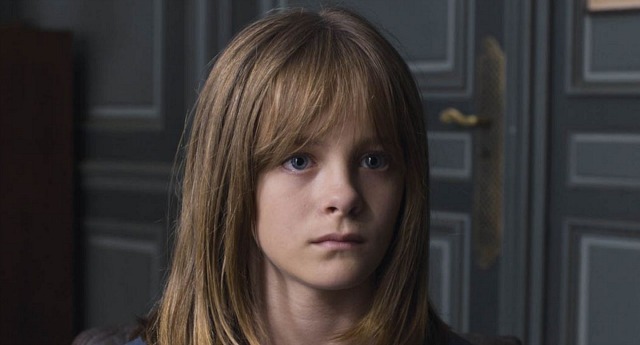 Happy End costar Fantine Harduin, who for my money has delivered the biggest breakout performance of the 2017 Cannes Film Festival.

The general reaction to Haneke’s Happy End, which I saw last night, is that the second half is better than the first. Make that the final third, or more precisely the last 20 or 25 minutes.

The other consensus view is that Happy End wouldn’t be much without two major performances, first and foremost Trintignant’s as the pater familias and financial kingpin who despises old age and longs for death, and secondly Fantine Harduin‘s as Eve Laurent, George’s attuned and quietly alarmed granddaughter.

Without these two characters Happy End would be too clinical and repellent to think about, much less recall. Let’s just bypass the parts that don’t focus on these two. Because the other characters, for me, felt like “who cares?” distractions, which is to say none at all.

But I’m telling you that Harduin has “it” — that mesmerizing, X-factor, can’t-take-your-eyes-off quality. She’s as much of a comer as Logan‘s Dafne Keen.

Yes, at one point Happy End‘s George mentions having suffocated his late wife when she was ailing, just as Georges did in Amour.

Yes, Isabelle Huppert plays the daughter of both characters in these films. Yes, both Georges are quite angry and indignant about being imprisoned in the bodies of old men, and vow to do something about this. Yes, the echoes are very clear and deliberate. You could almost ask “are these two old guys one and the same?” except Amour‘s Georges was a retired piano teacher and Happy End‘s George owns a manufacturing plant of some kind.

Happy End is slow and meditative and detached as fuck but when that ending finally happens…well, you’ll see it. (Or maybe you won’t.) It’s a familiar Haneke landscape and masterfully composed, as always. There isn’t a scene or a frame in which you’re not aware that a very smart sociopath (or an artist pretending to be a sociopath) is working the controls. The only newish aspect is a focus on smartphones, instant messaging, security cams, video streaming and grotesque video selfies.

Except for the discovery of Ms. Harduin, I can’t say I derived even marginal enjoyment from Happy End. As difficult as Amour was, I wound up seeing it three times. I honestly can’t imagine seeing Happy End again.