There’s a small but stunning “whoa!” in Brooks Barnes‘ 6.14 N.Y. Times piece about how Bruno simultaneously mocks and elbow-nudges homophobia. Universal, the film’s distributor, “won’t discuss the filmmaking process,” he writes, “but the studio insists that the vast majority of the people who appear with Sacha Baron Cohen had no idea they were being filmed for a Hollywood movie.” 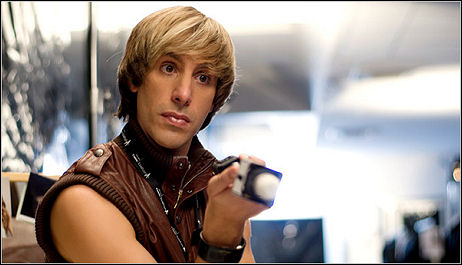 This is the article‘s big whopping obiter dicta — the words in passing that suggest there’s no limit to average people’s ability to keep their brains from noticing or absorbing anything that doesn’t naturally reside in their own private intellectual and emotional gulags. To delicately rephrase, after Borat you really needed to be a complete cultural hillbilly not to be aware that Cohen would be out and about last year filming Bruno in a blonde wig.

I’m mentioning this because it suggests, obviously, that the core element in Bruno, like in Borat, is a relentless expression of disdain for Middle American zombie culture.

“In mercilessly exploiting the discomfort created when straight men are ambushed by aggressive gayness, Bruno happens to (surprise!) expose homophobia,” writes Barnes. “Gay groups are reacting with deeply mixed emotions, heightened by the recent triumphs (Iowa) and losses (California) in efforts to legalize gay marriage. Is the film then vulgar, inappropriate and harmful? Or bold, timely and necessary? All of the above?

“Ultimately the tension surrounding Bruno boils down to the worry that certain viewers won’t understand that the joke is on them and will leave the multiplex with their homophobia validated.

“‘Some people in our community may like this movie, but many are not going to be okay with it,’ said Rashad Robinson, senior director of media programs for the Gay and Lesbian Alliance Against Defamation. ‘Sacha Baron Cohen’s well-meaning attempt at satire is problematic in many places and outright offensive in others.’

“Holding the opposite view are people like Aaron Hickland, the editor of Out magazine, who said he plans to put Mr. Baron Cohen on the August cover. ‘The movie does something hugely important, which is showing that people’s attitudes can turn on a dime when they realize you’re gay,’ Mr. Hickland said. ‘The multiplex crowd wouldn’t normally sit down for a two-hour lecture on homophobia, but that’s exactly what’s going to happen. I’m excited about that.’

“Bruno is not a lecture, at least not overtly. Like Borat: Cultural Learnings of America for Make Benefit Glorious Nation of Kazakhstan, the 2006 smash that starred Mr. Baron Cohen as an anti-Semitic Kazakh journalist, Bruno is first and foremost a raunchy comedy featuring a not-so-bright guy who embraces sexism, racism and stereotypes as he happily goes about his business. Borat and Bruno are both familiar to fans of Da Ali G Show, Mr. Baron Cohen’s satirical talk show, which first ran in Britain in 2000 and began appearing on HBO in 2003.

“Yet Bruno is also intended as a statement about what it is like to be a member of a minority in America in 2009. Mr. Baron Cohen’s malaprop-loaded antics are fictional, but the hate they can elicit from the people he encounters is ostensibly real. (The same was true of Borat, which some human rights groups also greeted with hostility; Abraham H. Foxman of the Anti-Defamation League said at the time that audiences ‘may not always be sophisticated enough to get the joke’).”