Mission: Impossible — Fallout (Paramount, 7.27) is loads of fun — a big mechanical whambammer with all kinds of plot turnarounds and shifting loyalties and eye-rolls into the forehead. It made me feel like I was ten. I honestly gasped four or five times and laughed out loud six or seven…something like that. And one of the laughs involves Wolf Blitzer.

Try and catch it on a big fat IMAX screen, which I did earlier this evening.

I’m being completely complimentary when I call Fallout grade-A, bucks-up dope, and by that I mean the kind of high-octane, expertly performed, adrenalized nonsense that gives the term “jizz-whizz” a good name (and that’s saying something). It’s the kind of crazy-silly wank that makes you feel good about life — the kind that lifts you up and smells like expensive bar soap, high-grade leather and canvas money bags. 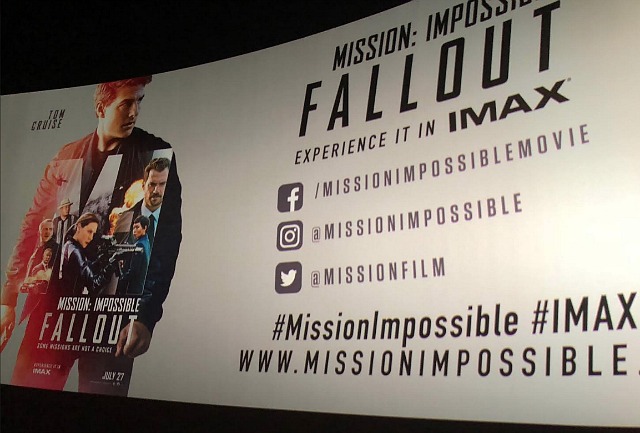 The thing that I really loved was how many of the non-action scenes are flecked with an attitude of dry, underplayed comedy. The kind of humor that says “ya gotta get a little fun out of life, right? Are we full of shit or just lucky-ass boys spending loads of dough or…well, you tell us. We’re half-giggling and half-grimming up and obviously having fun with the priciest toyset in the world, wearing masks and buzzing around Paris on motorcycles and flying helicopters in Kashmir and yadda yadda, and well paid all the while.”

Fallout doesn’t quite tip over into hah-hah comedy but the attitude is definitely jaunty if not jovial. If director-writer Chris McQuarrie had gone a little bolder and embraced a tiny bit more of a “fuck it” attitude and turned up the deadpan Three Stooges dial a bit more, this could have been an amazing piece of action comedy, and I mean like something the world has never experienced before. But Fallout holds itself in check and so it’s just a whole lot of high-grade, Daffy Duck-on-ritalin, state-of-the-art excitement with more than a few bone-dry guffaws.

Tom Cruise fills the bill, of course, but he’s looking older. I’m sorry but he is. A wee bit puffy and fuller of face. Some of the humor is about how Ethan Hunt is still the energizer bunny (always!) but now he’s getting winded a bit sooner, and even limps a bit after an especially traumatic bodyslam. I honestly liked Henry Cavill a bit more. He’s a good, disciplined, straight-dealing actor, and he handles the dry under-playing in just the right way. Some of his reaction shots are quite funny. Hollywood Elsewhere says “Cruise is cool but Cavill is better.”