“Just as [Steve] Bannon seemed to reach a low point in his relationship with Trump, [Jared] Kushner’s role in the Russia probe emerged as the most important piece of White House intrigue. Kushner, though he didn’t have the title, was the Trump campaign’s de-facto campaign manager. He was at Trump’s side through the eras of Roger Stone, Carter Page and Paul Manafort. And more important, as we learned last Friday, Kushner was working closely with Flynn, during the transition, on his dealings with the Russians, and he has attracted a similar level of interest from the F.B.I. 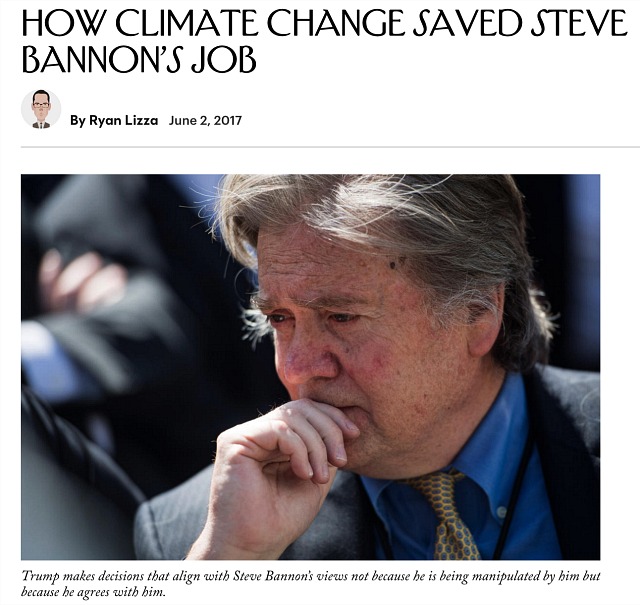 “The second change since Bannon’s low point was that a decision on whether to withdraw from the Paris climate accord finally needed to be made. It was the most important fight pitting Bannon against Jared and Ivanka yet. And it played to all of Bannon’s strengths. The first Trump adviser described Kushner and Ivanka as ‘more or less Trump’s conscience,’ and as ‘more pragmatic, a little less ideological,’ or perhaps ‘multi-ideological.’ Bannon, he said, ‘speaks to Trump’s id.’

“A third Trump adviser, more closely aligned with the Bannon faction, was less charitable. ‘I think Jared and Ivanka are concerned with being accepted in the right places, they care about what the beautiful people think,’ he said. ‘They care about being well received in the Upper West Side cocktail parties. They view Steve as a man with dirty fingernails, with some weird, crazy, extremist philosophy they don’t think is in the best interest of the President.

** rural and rust-belt dumbshits, marginally educated if that, Fox News-watching, the dregs of 21st Century society.