In “Fear and Loathing in Las Vegas“, the late Hunter S. Thompson described the 1966 to ’67 era of cultural explosion-revolution as “the kind of peak that never comes again. San Francisco in the middle ’60s was a very special time and place to be a part of. Maybe it meant something, maybe not in the long run . . . but no explanation, no mix of words or music or memories can touch that sense of knowing that you were there and alive in that corner of time and the world.” 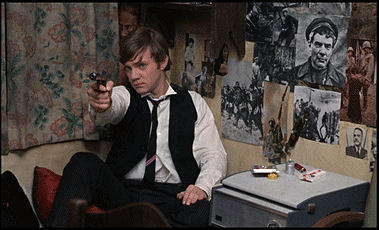 Malcolm McDowell in If…

You can feel a bit of this as you watch Lindsay Anderson‘s If…, which came out on a Criterion Collection DVD a couple of weeks ago. It’s a film that gets eighty or ninety things right (at least), and yet the finest of these is providing a distillation of mid ’60s rightness and holiness and inevitability. Precisely because it’s a metaphor piece and not a recreation of the times (i.e., it uses none of the music).
Except for the long hair and sideburns If… could be happening in the early ’50s or late ’70s or the ’80s, even. It’s about a repressive British school for boys, one that dispenses the old crisp disciplines and stiff-upper-lip values that fortified the British empire for two or three centuries, and about how a lot of this stuff just stopped flying in the early to mid ’60s. And how young people everywhere just knew this.
And yet a strange feeling hit me when I watched it a while back. The final scene depicts a gun battle between the old guard and the new, a small group of rebellious seniors firing machine guns from a rooftop while dozens below take cover and return fire. It’s what was happening back then, exactly like this, and yet it suddenly felt distant. It didn’t deliver the charge that I remembered from way back when.
I wasn’t exactly relating to the harumphy older guys being fired upon. I was still “with” Malcolm McDowell and the gang because I still believed they were coming from a very pure place, and I knew it had to happen. It always does. But I was also half-saying to myself, “Gee, guys shooting at each other…this is too bad. I’m sorry.”