During last night’s Thelma and Louise screening at the Academy I fell in love all over again with Callie Khouri‘s dialogue. Especially that scene when Geena Davis‘s Thelma is explaining to Susan Sarandon‘s Louise that things just aren’t the same any more, that something deep and transforming has taken hold of her. Thelma: “But, uhmm, I don’t know…you know? Something’s, like, crossed over in me and I can’t go back. I mean, I just couldn’t live.”

And I love this back-and-forth as they’re driving through Monument Valley:

Louise: Guess you could call it that, my eyes are open.

Thelma: I feel really awake. I don’t recall ever feeling this awake. You know? Everything looks different now. You feel like that? You feel like you got something to live for now?

Louise: We’ll be drinking margaritas by the sea, mamacita.

Thelma: You know we could change our names.

Louise: To live in a hacienda.

Thelma: I want to get a job, I’ll work at Club Med.

Louise: Yeah, what kind of deal is that cop going to have to come up with to top that?

Thelma: Have to be pretty good.

Louise: Have to be pretty damn good.

Thelma and Louise wasn’t just an important expression of rage and refusal and sisterhood among women who’d had it with predatory male bullshit, but something seminal and primal, and on some level even eternal, if you consider that it’s as strong a film now as it ever was, and perhaps even stronger. I was surprised by how fresh and vital it still seems. And funny — it has more than a few big laughs.

Yes, there were three male characters who were repulsive, sadistic brutes, and Brad Pitt‘s character was no prize in the end, but there was also Harvey Keitel‘s compassionate detective and Michael Madsen ‘s sympathetic boyfriend, and that cop who started crying when he was about to be put into the trunk. And there was also the rasta man on the bicycle who blew pot smoke into the trunk.

I think the above alternate ending (i.e., the one that tested poorly, thereby causing its removal) needed different music, but otherwise it was strong and sad and penetrating. 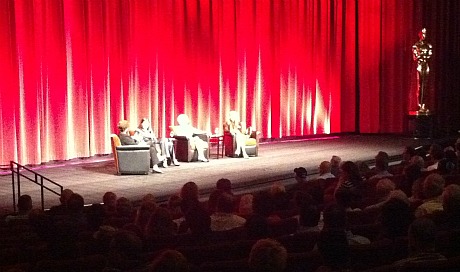 Incidentally: There was no air-conditioning during the pre-screening dinner event, and the theatre itself had no circulating air either…until later during the film, when it finally seemed to kick in. It was pretty awful at first. The Academy fathers need to get someone to come in and make sure the a.c. is operational.