Criterion is releasing a two-disc DVD of Lindsay Anderson‘s If…. on 6.19. And in tribute to this, Manhattan-based reader Chris Clark has slapped together a home-made trailer for it, hoping to “maybe drum up some interest for the first-time audience,” as he puts it. 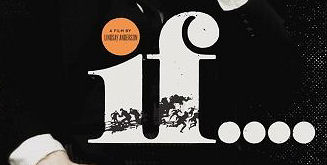 Released in 1968, If… “is a daringly anarchic vision of British society, set in a boarding school in late ’60s England,” the blurb reads. “Before Kubrick made his mischief iconic in A Clockwork Orange, Malcolm McDowell made a hell of an impression as the insouciant Mick Travis, who, along with his school chums, trumps authority at every turn, finally emerging as violent savior against the draconian games of one-upmanship played by both students and the powers that be.

“Mixing color and black-and-white as audaciously as it mixes fantasy and reality, If… remains one of cinema’s most unforgettable rebel yells.”