“I wrote the first sentence — ‘If Dad hadn’t shot Walt Disney in the leg, it would have been our best vacation ever!’ — and the rest was automatic,” recalls John Hughes in a piece about the writing of “Vacation ’58,” which became National Lampoon’s Family Vacation. I’ve always loved Hughes’ original story; I never liked the film all that much. 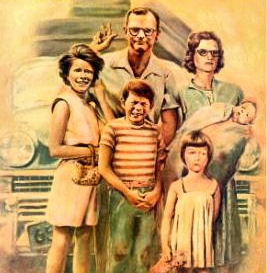 “I used the voice of a boy to cover my lack of skill, and to flatten the big moments. In Rusty’s prosaic language, a ruined vacation and an assault with a deadly weapon upon an entertainment legend enjoyed comparable importance. I called to mind a clamor of relatives, situations, catchphrases, and behaviors. I was mindful of my feelings as a child witnessing phony pop inventions go to hell. I understood that the dark side of my middle-class, middle-American, suburban life was not drugs, paganism, or perversion. It was disappointment. There were no gnawing insects beneath the grass. Only dirt.

“I also knew that trapped inside every defeat is a small victory, and inside that small victory is the Great Defeat. This knowledge — along with a cranky old lady; strange, needy relatives; a vile dog; and everything that could possibly go wrong on a highway — was enough to make a story, plug a hole in the magazine, and get on to the next issue.”