“Does Diane Keaton owe some loan sharks a considerable amount of cash?,” asks critic Brian Orndorf in his review of Smother (opening 9.26). “Are there incriminating photos of her that she’s trying to keep out of circulation? I’m having trouble understanding why Keaton would, over the course of a single year, take part in both Mama’s Boy and now Smother. 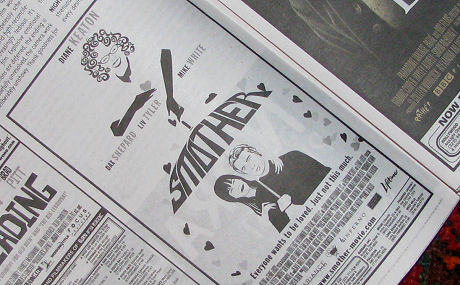 “Perhaps she was poisoned by merciless Asian gangsters with strict instructions to make two career-denting comedies that methodically peel away her integrity before she was allowed the sweet kiss of a life-saving antidote. Heavens, I hope that’s the impetus behind these recent professional decisions, otherwise Keaton has lost her mind.
And what about Keaton’s other two recent stinkers — Mad Money (’08) and Because I Said So (’07)? Has she had her taste buds surgically removed?
“Remember when Keaton was once choosy with her roles,” Orndorf concludes, “waiting years to appear on the big screen in just the right starring vehicles? If the prospect of sharing the frame with Dax Shepard now makes Keaton sprint to the set with pride, it’s obvious those award-winning, reputation-fostering days are over.”
What a comedown from the glory days of The Family Stone (’05), a landmark holiday comedy in which Keaton gave one of her best performances ever. Not to mention another triumph two years earlier when she won a Best Actress nomination for her work in Something’s Got To Give.