“For all the warnings of history, the makers of Indiana Jones and the Kingdom of the Crystal Skull will stage their film’s world premiere at the festival on the French Riviera tomorrow night,” writes Times Online correspondent Dalya Alberge. “The film, which opens in the setting of 1957 at the height of the Cold War, is arguably the most anticipated movie release of 2008. Such is the interest that the trailer was seen more than 200 million times in its first week of release on the internet. 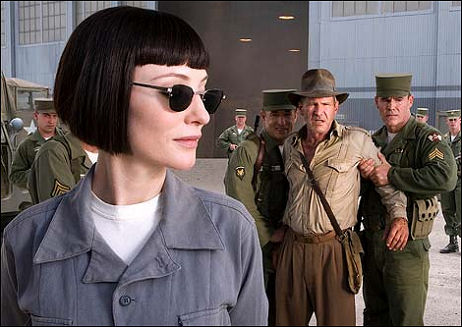 {[But] the last time a studio dared to premiere a major blockbuster in this sanctum of high-brow cinema, it was savaged. The actors and director of The Da Vinci Code barely escaped with their lives.”
Except The DaVinci Code made lots of money after that. The ’06 Cannes beat-down was embarassing, sure, but the general public didn’t care. Hundreds and hundreds of millions were spent on DaVinci Code admissions. And nobody in ticket-buying land will give a damn if Cannes critics whack Indy 4. At all. Obviously Paramount marketers know this, and that’s why they’re here. The Cannes spotlight will boost the film’s European, Eastern European, Russian, Asian, African and South American earnings. And that’s what matters.