I went four, four and a half minutes with Harrison Ford a little while ago at a small Indiana Jones and the Kingdom of the Crystal Skull party held at the Carlton hotel. Usually you get maybe two or three minutes with a major star at a gathering like this with aggressive journalists prowling around like wolves, looking for a name to bite into and a quote to take home. 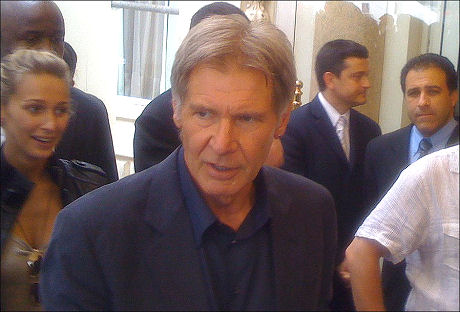 I didn’t even try to talk to Steven Spielberg, who was wearing a black baseball hat and dressed like some semi-retired suburban guy driving down to the hardware store for some weed killer. He was there for maybe 25 minutes, if that. I also spoke to Indy 4 costars Shia LeBeouf (guarded, formal), John Hurt, Ray Winstone and Jim Broadbent.

Ford and I talked about director and mutual friend Phillip Noyce, who directed Ford in Patriot Games and Clear and Present Danger, and about Phillip’s recently born daughter, Anthony Minghella‘s tragic death, his excellent appearance (trim, bright eyes, good color..forget that Uncle Festus stuff!), how often he works out (three times weekly), how many stunts he did in the film (“I just did the acting,” he said) and some minor stuff. We’d last spoken at a San Francisco junket for Clear and Present Danger, in ’94.

It was an odd crowd. Nothing but “top journalists,” as one Paramount publicist said, but some of them looked…I don’t know, a little weird. Like cattle buyers or Israeli used-car salesmen. They didn’t have the right uptown, dark-suited vibe. Bad clothes, funny hair. Not to judge a book by its cover. 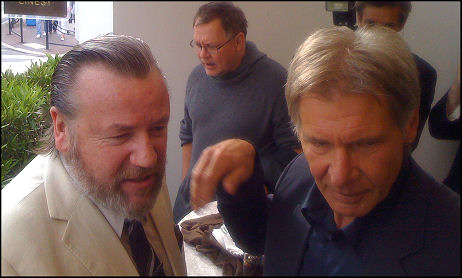 I saw Ford give Fox 411‘s Roger Friedman one of those “jeez, man…I don’t know” looks when they started talking. Friedman has seemingly asked something unusual or challenging, something that required a little heavy consideration.

I told LeBeouf he looked great also, adding — this was a minor mistake — that the program obviously agreed with him. “The program?,” he asked. “Yeah,” I said. “AA….no? I read you’d gone into the program after the Chicago Walmart bust.” “Nope…no program..just livin’ my life,” he replied, registering zero emotion, cool as a cucumber. The guy looks rail thin — thinner that the way he looks in Indy 4, thinner than Transformers, etc.

I spoke to Hurt about his portrayal of Warren Christopher in Recount and the hullaballoo that had broken out about the accuracy or fairness of depicting the former Secretary of State as a wimp, which the film certainly does. He said the research was up to the filmmakers, but that he knew they had based the screenplay on first-rate source material. He also said that Recount screenwriter Danny Strong is smart as whip and a mine of information. 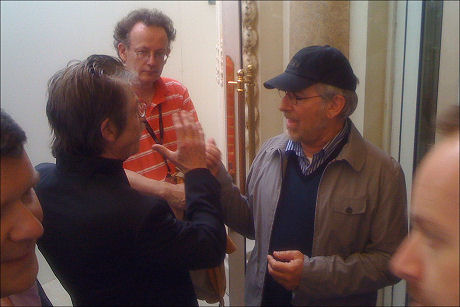