That hooded, black-robed figure with the stern expression and almost Kabuki-white face paid a visit to Ingmar Bergman‘s home on the island of Faro last weekend (or certainly within the last few days). I like to think he would have been polite about it and knocked on the front door, but one way or the other he sat by the bed and took the one of the four or five greatest film directors of the 20th Century by the hand, and that was more or less that — a final transition and fade to black. 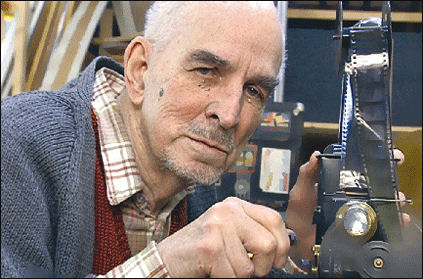 The man was a genius, a God…a deliverer of pure, chilly clarity in a muddled and equivocating world. His work was astounding, penetrating, devastating. Ingmar Bergman made me feel better about being an occasional misanthrope and down- head and a sometime depressive than any other artist I’ve ever encountered. And when they were in the mood, Bergman and his cinematographer Sven Nykvist had no equals at conveying subtle but heated eroticism.
The slightly discomforting thought is that Bergman’s greatest films (the ones he made from the mid ’50s to mid ’70s) and in fact the very idea of Bergman himself — a filmmaker whose material often came from the deepest gloom-pits of his soul, who didn’t fill a room with light as much as focus on an intimate, small-room situ- ation with a kind of blue-flame intensity, and who adhered to a visual language that was often somber and austere — has been regarded as a yesteryear thing for a long time now.
I wonder how many under-35s have even seen a Bergman film. The Bergman art- house aesthetic of the ’50s and ’60s is about as far from the Tarantino film-geek attitude as you can get. Film Snob Dictionary authors Martin Kamp and Law- rence Levi wrote a couple of years ago that “watching a Bergman film is so PBS tote-bag, so Mom-and-Dad-on-a-date-in-college, so baguettes-and-Chardonnay.”
Jett, 19, knows who Bergman is (he first heard his name and rep in that passage from Manhattan when Diane Keaton‘s character calls him over-rated) but he’s never seen a single one of his films. I’m going to try and persuade him to sit down and watch a Criterion DVD of The Silence or Through a Glass Darkly or Shame sometime later this week.