It suddenly hit me five minutes ago that I’ve never read Wlliam Monahan‘s London Boulevard script, so if anyone could forward…thanks. It’s pretty much finished, no distributor yet, presumably destined for distinction in the fall. That’s Colin Farrell, of course — a guy named Mitchell, just out of the slammer and fated to fall in love with Keira Knightley‘s Charlotte, the actress in the black-and-white photos, and run afoul of some gangster guy or guys (presumably played by Eddie Marsan or Ray Winstone). 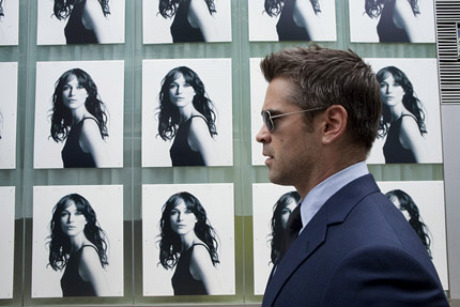 The above photo was first linked to by Awards Daily.

Pic is based on Ken Bruen‘s 2001 novel . Mitchell’s romantic interest in Bruen’s book is a 60 year-old reclusive actress named Lillian Palmer, so Monahan has definitely shuffled that element around. So Knightley will play…a reclusive 25 year-old actress?

Bruen’s book was described in a book-review synopsis as a “gritty reimagining of Billy Wilder‘s Sunset Boulevard, transplanting the action from glitzy Hollywood to the rough and tumble London streets…looking for an honest job, Mitchell finds work as a handyman for a wealthy and reclusive former stage beauty, Lillian Palmer, who lives in a sprawling estate with her taciturn butler, Jordan.”