“While there is violence galore in Ian Fitzgibbon‘s A Film With Me in It, the lion’s share is accidental,” writes critic Marshall Fine. “That’s the joke in this blackly humorous Irish film. People drop dead at an alarming rate in this movie, and the deaths are unbelievably accidental — and are certain to seem so to the authorities. 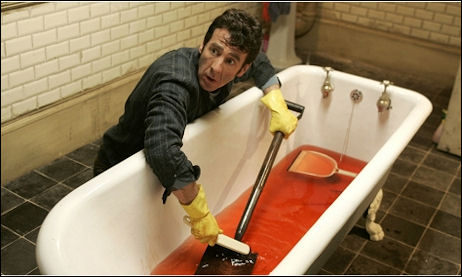 Doherty or Moran? You decide.

“Unemployed actor Mark (Mark Doherty) and his would-be writer-filmmaker friend Pierce (stand-up comic Dylan Moran) are ne’er-do-wells, renting flats in the same building from the same gruff landlord (Keith Allen), who is badgering them for their respective rents. Mark has spent the rent on other bills – like heat for the flat and gas for the car – but he hasn’t told his girlfriend Sally (Amy Huberman), with whom he lives, along with his paralyzed brother Dave (David O’Doherty).

“As Mark tries to figure out how to keep from being evicted, he suffers a mini-plague of accidents within his ramshackle apartment. Let’s just say the apartment’s rattletrap fixtures and shaky furniture claim a series of victims in record time, forcing Mark and Pierce to figure out how to dispose of the various corpses without landing in jail for something they didn’t do.

“There’s a wonderful comic chemistry between the taciturn Doherty and the alternately blase and panicked Moran. Doherty seems mostly to be in shock, while Moran – as the would-be screenwriter – keeps trying to puzzle out the situation as though it were a movie he was watching.

“It’s a slight film but an explosively funny one. I happened to see it at the Toronto Film Festival in 2008 — and now it’s finally being released (who knows how briefly) at lower Manhattan’s IFC Center. It may roll out elsewhere – or turn up in some video-on-demand delivery system. By all means, make an effort to track it down. It will make you laugh – hard.”

Why don’t I believe Fine’s last sentence? If A Film With Me in It is that funny then why wasn’t it acquired for a bigger, broader release out of Toronto? And why didn’t the IFC people invite me to see it?