Irish Lament For A Friend 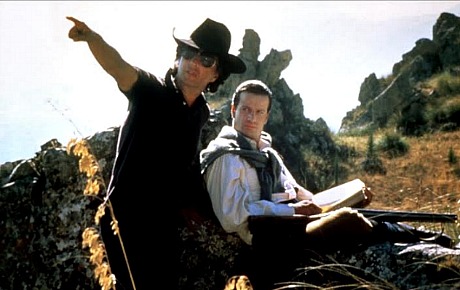 Heaven’s Gate, by comparison, is Cimino’s “unpopular” masterpiece — but here again, what other film in movie history compares with it, in tempo, texture or meaning? The film dances to its own drummer from first frame to its final fade-out, and in between offers the world a mural of American life bloodily brought to life as a war-torn immigration, complicated by social class.

People thought Michael was a right-winger for using “God Bless America” in The Deer Hunter. Here he appears downright Marxist — not that he got any credit on opening night. The film was blasted in 1980 because it cost too much. Now that Michael’s dead we hear the jangle of cash registers yet again.

See the film. Every penny is onscreen. In the end, that is all that matters. Michael had a romantic and fanciful nature — and that emerges in the bravura sweep of his movies, the sense that his men and women are living a grand dream of themselves, powered by their own ambitious fantasies — yet his movies never, ever imitate other movies. Cimino always was and is life-loving and thus original. What his characters do and say is always authenticated by his own, often eccentric but deep firsthand sense of experience.

Year of the Dragon might reasonably be compared with such other masterpieces of police procedure as Friedkin’s To Live and Die in L.A. or Michael Mann’s Heat. Here, as in those great pictures, we have (in structure) a familiar squaring off between a cop and criminal of fatefully matched brilliance.

What sets Dragon apart is that we are also inside a particularly maverick pair of agonies. Mickey Rourke’s police captain is an unapologetic racist, and John Lone’s ultra smooth drug lord is just as unapologetically ruthless. Yet over time, under Cimino’s direction, we become deeply enmeshed and involved with these men’s hearts and souls, flaws and all — and that’s a miraculous thing to leave an audience with.

The Sicilian and Desperate Hours are likewise fully alive and fascinating, frame for frame.

Cimino’s first feature, Thunderbolt and Lightfoot, is a delightful, funny action-adventure built around a road trip – and so is his last, Sunchaser. (Editor’s note: It was titled on-screen as The Sunchaser.] He comes full circle in his body of work, and goes out the way he came in.

Cimino had so many other films he wanted to make. Conquering Horse, based on the novel by Frederick Manfred, would have been an epic of Lakota life, without a single white person in it. (“Somewhere in the middle of it my hero would encounter a single set of wagon tracks,” Michael told me, “and that would be it for white people.”) Man’s Fate, based on the novel by Andre Malraux, would have chronicled the doomed 1927 effort by the communists to create a revolution in China, pre-Mao. 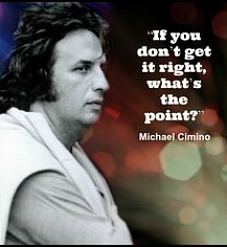 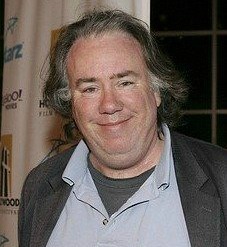 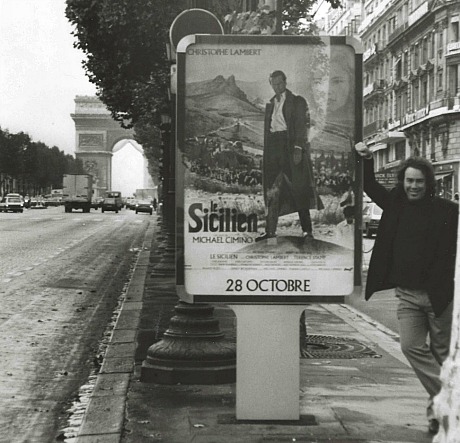 Feeney in Paris in 1987, just after catching the 146-minute cut of The Sicilian.

There are dozens of others — each remarkable, but among them a particularly sweet original from the early 1990s called Heaven is a Sometime Thing. Michael and I tried to collaborate on that one, but he was generating pages at a rate of 15 and 20 a day and by day three I simply stood back and watched him take off. It was rightly and beautifully his alone.

We had been introduced in 1985, after I’d written about Year of the Dragon. We became close friends after the death of our mutual friend Jerry Harvey in 1988. It was Jerry who, as the iconic programmer of L.A.’s late great Z Channel, rescued the director’s cut of Heaven’s Gate from its oblivion in a British warehouse.

I last saw Michael two weeks ago — June 19th. We enjoyed a warm, subtly intense lunch filled with energetic talk. “Subtly intense,” I say, because we orbited the earth in terms of topics, mostly personal, and because he took unusual care — as he’d done when we met the previous week — to praise and thank me for certain things over the years. His manner was low key, but emphatic and heartfelt.

He was telling me goodbye, but I didn’t know it. He was giving me a great gift, though I only realize in retrospect how great. This is very typical of the world’s relationship with his films.

In no way did he seem ill. He gave no indication of being sick, and even seemed the soul of health: brimming with plans and projects.

Michael showed me roughly 25 pages of a manuscript he’d produced in the week since our previous get-together, when he’d shown me an earlier dozen. His handwriting was impeccable, printed in close pencil. He was jump-starting a new project, zooming along blind-folded so to speak, free associating in the first-person, remembering musicians he’d observed, women he loved. Each sentence and paragraph sizzled with energy and precision — at times I was laughing out loud at this or that snippet of long-ago New York conversation, or some offbeat figure of speech. It zipped and zoomed in every conceivable direction, but I didn’t care.

“That’ll be the last thing I’ll show you for now,” he told me in the parking lot as we hugged goodbye. His tone was filled with affection, but the statement surprised me.

“Really?” I said, “Feel free to call if you have anything new to show before you leave town.” (He would be flying east in a few days, he said.) Because the odd torque of his words made me nervous, I added: “Why don’t we check in with each other before you go?” He smiled, sunglasses flashing as he clapped a hand on my shoulder: “No need.”

I don’t know what he died of — and prefer to honor his privacy. A beautiful, textbook tough guy: That was my friend Michael. He was also profoundly sensitive — quick to anger, if he felt unjustly dealt with, or meanly slighted. (He could often be rude to others as a result. That this was a childlike defensive tactic was never much consolation to those he was rude to.) Yet his deepest instincts inclined toward kindness – and my most abiding memories of him will always be of his no-holds- barred generosity, of his diamond-like self-discipline, and his ability to suffer life’s body blows with such stoic pride, courageously and without complaint.

To my own dying day I will hold in my heart the grace and upbeat, exemplary strength with which he departed our friendship, and this world.

July 3, 2016by Jeffrey Wells8 Comments
« Previous post
Compensation Factor
Next post »
Cimino Is Gone, Although He “Died” Decades Ago