It’s pleasing to note that Richard Linklater‘s Bernie, which I liked even more after catching it a second time, is doing reasonably well with critics — 77% on Rotten Tomatoes and 73% on Metacritc. Some have issues because it’s not any one thing — not a comedy or a study of bizarre closeted psychology or a straight murder-in-a-small-town tale, but all these things and more. And Linklater’s direction is so clean and true and precise. It’s a dark but amiable delight. 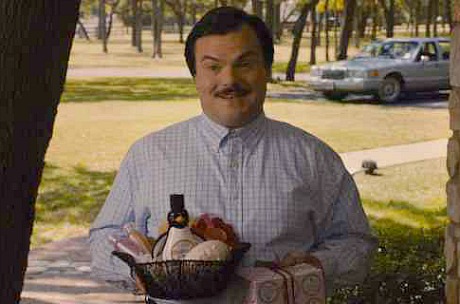 And as I noted nine or ten days ago, Bernie says something about human nature that everyone will recognize as rock solid when and if they see it. Which is basically that feelings and likability rule, that Americans trust beliefs more than facts, and that we’re governed less by laws than emotions. You can say “yeah, I know that without seeing a film” but the observation sinks in extra-deep after hanging with Richard and Bernie.

Linklater based this half-drama and half-odd duck comedy on a true story by Skip Hollandsworth that appeared 14 years ago in Texas Monthly. It was about a story that occured in the ’90s in Carthage, a nice little pine-tree town in East Texas.

Jack Black‘s Bernie is a sweet, impeccably mannered mortician who’s much loved by the townfolk, and Shirley MacLaine is Marjorie, a rich, miserable, foul-mannered and acutely disliked woman whom generous-hearted Bernie becomes special friends with, and then her employee and then her travelling companion on trips to Europe and such.

He likes her money, of course, but even gracious and super-patient Bernie can’t quite handle her temperamental personality. He abruptly loses it one day and shoots her four times in the back, and then stuffs her body in a freezer in Marjorie’s garage because he hasn’t the heart to bury her or otherwise hide the body.

Bernie is eventually found out and tried and convicted, but it struck me that his crime is roughly the same crime of passion (or temper) that Ben Gazzara was tried for in Otto Preminger‘s Anatomy of a Murder. The difference is that Gazzara’s Lieutenant Manion is found not guilty because the jury accepted a temporary insanity defense urged by attorney James Stewart.

The specific scenario was that Manion was seized by an irresistible impulse to shoot Barney Quill, a tavern owner who had raped Manion’s wife (Lee Remick). For whatever reason the Texas jury that weighed Bernie’s case didn’t buy this, but what’s good for the goose should be good for the gander, no?

The Wiki page says that “in criminal law, irresistible impulse is a defense by excuse in which the defendant argues that they should not be held criminally liable for their actions that broke the law, because they could not control those actions” due to “some form of insanity.”

When the Bernie jury announces their guilty verdict, I wanted to climb right through the screen like Jeff Daniels in The Purple Rose of Cairo and say to the jurors, “Hold up, people, wait a sec…did any of you guys ever see Anatomy of a Murder? ‘Cause this is pretty much the same deal, and from what I can tell Bernie’s irresistible impulse to shoot Marjorie was at least as justified as Ben Gazzara’s was, and to hear it from the people of Carthage a lot more so. So how come Lt. Manion walked and Bernie didn’t? Lorena Bobbitt was found not guilty when her defense argued that an irresistible impulse led her to cut off her husband’s penis, and that was surely a weaker circumstance than the one that befell poor Bernie.”