There are certain opinions you’re encouraged to have, and others that are better left unsaid. What I’m about to share doesn’t qualify as one of the latter, but it slightly flirts with that realm. I’ll try and share it cautiously and with respect to all parties.

The problem, of course, is that some members of Frank’s family are rube homophobe types, or so Frank fears. (Certainly when it comes to his younger brother Mike, played by Steve Zahn.) Plus gay liberation was in its infancy in the early ’70s, and it wasn’t exactly a time for gay men to routinely come out to backwater friends and families, and so Walid’s decision to invite himself along seems to portend nothing but toil and trouble. 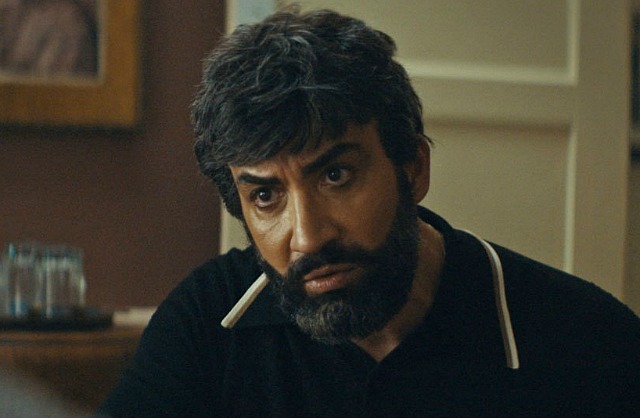 I couldn’t stop myself from asking why Frank’s rural, conservative family has to be confronted with his sexuality and lifestyle issues on the occasion of a funeral of a paterfamilias? Why do they have to grapple with this in a time of grief? What’s wrong with taking things one step at a time? Frank’s clan lives on a planet that has nothing whatsoever to do with his NYU realm so what’s the rush? Where’s the need? Couldn’t this issue be eased into down the road?

And now for my awkward opinion, which is that I didn’t care for Macdissi’s company. Not because he’s gay, but because he struck me as slightly creepy and overbearing in both an emotionally needy and joyful-alpha sense. I’ve always disliked people who won’t stop beaming and grinning — they’re almost as bad as those who laugh hysterically in bars and restaurants, and the instant that Walid appeared I went “oh, no…an emotionally effusive gay guy who wears his large heart on his sleeve.” He has a cloying manner and is seemingly too intimately invested in Frank to pass himself off as a straight friend who’s tagged along for emotional support or whatever.

Plus I didn’t care for Walid’s overly bushy black beard and modified mid ’60s Dave Clark Five cut. Right away I was saying “Jesus, this look doesn’t work at all.” He’s too big and broad-shouldered and too…I don’t know but right away I was muttering “trim your hair and beard, bruh, and generally tone it down.”

I’ve been delighted by gay characters almost my entire moviegoing life, and by this I include non-gay characters played by gay actors. I can recall watching This Gun For Hire on TV when I was 12 or 13 and recognizing right away that the florid Laird Cregar was perverse in a way that I’d never seen before. The first openly gay character I felt something for inside a theatre was Hurd Hatfield‘s “Terence Huntley” in The Boston Strangler (’68), followed by Cliff Gorman‘s “Emory” in The Boys in the Band (’70).

I could go on and on. Why am I pointing this out? Twitter jackals.

I might as well admit that I turned Uncle Frank off before the trio arrived at the homestead. I’ll try and finish it tonight, but I’m dreading what will happen.

If you’ve got a few seconds, you’ve got time to hear from @sophialillis and @Paul_Bettany about their new movie, Uncle Frank.

P.S. You can watch it now. pic.twitter.com/0eJnGt00Zi