It Was Holmes All Along

Benjamin Wallace‘s chatty, sometimes brazenly phrased Vulture piece about the dissolution of TomKat (“An Inquiry Into The Very Public Private Marriage of Katie Holmes and Tom Cruise“) comes to the conclusion that apart from the venal Scientology element, the possibly-straight Cruise isn’t as much to blame for the breakup as much as Holmes’ feelings of being “trapped in someone else’s movie. 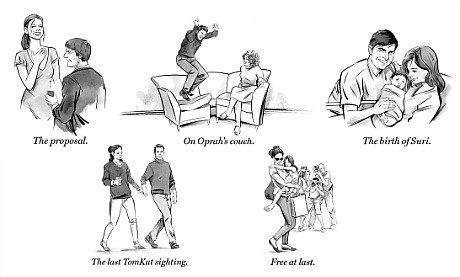 “Promised above-the-title billing, [Holmes] never managed to move beyond a supporting role,” Wallace writes. “Where at 26 she found Cruise’s monster life ‘exciting,’ at 33 it just made her feel smaller. And it doesn’t require any overt or conscious cynicism on Holmes’s part, or mean she wasn’t genuinely smitten with Cruise when they wed, for her also to have expected the union to be a boon to her career.

“Marrying Cruise had done wonders for Nicole Kidman, who not only became massively more famous but whose acting career took off while she and Cruise were still together. And Holmes, who already had a hit TV series to her name and a $1 million role in Batman Begins at the time of her wedding, was starting ahead of where Kidman had. Indeed, marrying Cruise did make Holmes a lot more famous — there she was on the cover of Harper’s Bazaar, styled by Victoria Beckham — but it also, because of Cruise’s bizarreries, drove her Q rating downward. When her character was reprised in the next Batman movie, The Dark Knight, Holmes was passed over for Maggie Gyllenhaal.

“She got parts in mostly small movies, but they bombed at the box office. The Times called Holmes the ‘weakest link’ in Mad Money, and for her work in the Adam Sandler comedy Jack & Jill, she was nominated for Worst Supporting Actress at the 2011 Golden Raspberry Awards (her second nomination; she had received the first for Batman Begins).

“At the same time, unfavorable comparisons between her and fellow Dawson’s Creek alumna Michelle Williams became painfully inescapable. As Williams became a figure of sympathy because of her husband (the late Heath Ledger), Holmes became a joke because of hers. Holmes is said (scout’s honor!) to have been enraged by Williams’s success. While Holmes was playing Jackie O. in a mini-series that ended up airing on Reelz — that’s Channel 238 in the Time Warner NY cable system, if you’re wondering — Williams was playing JFK’s sometime-mistress Marilyn Monroe, in a feature film, en route to a third Oscar nomination.

“But Scientology, or rather its terrible reputation, offered a way out. Holmes, unable to get the kinds of roles she wanted, realized she could cast herself in the part of a lifetime. Like Truman in The Truman Show, she finally grasped her ontological status as a character in a fiction, and that self-awareness propelled her out of the story and crashing through the fourth wall. She knew a good third-act twist when she saw one.

“‘It’s not like she ever had a huge career to begin with. She was a rising star. Now she will have a huge career,’ says an editor at a leading celebrity magazine. Holmes, emerging from a seven-year, one-on-one apprenticeship with the world’s most famous action hero, simply rewrote the script.”

“Or maybe she didn’t. But what a story.”