It's common knowledge that Lauren

It’s common knowledge that Lauren Weisbeger, former Vogue slave and author of the book, “The Devil Wears Prada”, that’s been adapted into a fashion industry comedy-drama of the same name (20th Century Fox, 6.30), modelled her magazine-boss villain on Vogue editor Anna Wintour. And now Women’s Wear Daily ‘s Jeff Bercovici is passing along remarks taken from a W interview with Meryl Streep, who plays the Wintour character, Miranda Piestley. “I thought [Weisberger’s book] was written out of anger…she seemed not to have an understanding of the larger machine to which she had apprenticed,” Streep is quoted as saying. “So she was whining about getting coffee for people. If you keep your eyes open [in that situation], you’ll learn a lot. But I don’t think she was interested.” The script, which I read and wrote about early last January, is “a Manhattan fast-lane chick flick about the rigors of working for an Anna Wintour-like Boss from Hell.” Anne Hathaway (Brokeback Mountain) plays Andy, the college journalism major hired to be Priestley’s junior assistant as the film begins. My only complaint, I wrote, was that I’d like to see a Hollywood confection some day “that doesn’t trot out the same old bromide that demanding, high-paying, high-pressure jobs are bad for your soul and especially your relationship with your sweet laid-back boyfriend (played in the film by Adrian Grenier).” Streep’s Priestley character is definitely Anna Wintour-ish and then some for the first 75 or 80 pages, but she gradually becomes more vulnerable and human and mellowed-out towards the end. (The draft I read was over a year old — 3.14.05 — with the latest contributor being Aline Brosh McKenna (Laws of Attraction) Previous revisions were by Peter Hedges (About a Boy), Howard Michael Gould, Paul Rudnick and Don Roos. Directed by David Frankel and produced by Wendy Finerman, Prada opens two and 2/3 months from now and there’s still no website for it. 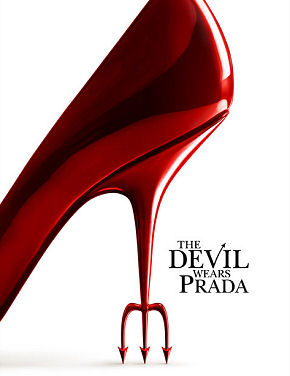