Last night I met the great Vlad Ivanov, the Romanian actor who was named 2007’s Best Supporting Actor by the Los Angeles Film Critics Association for his abortionist performance in Cristian Mungiu‘s Four Months, Three Weeks and Two Days. Ivanov was at the Tribeca Cinemas for a Romanian Film Festival screening of Corneliu Porumboiu‘s Police, Adjective, and an after-party. 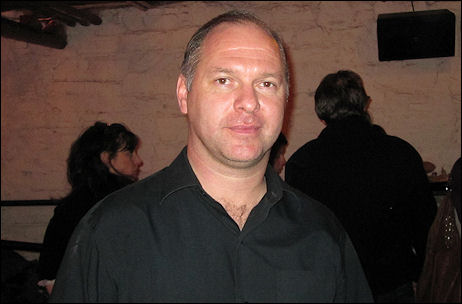 Ivanov plays a small but pivotal role as a police captain in a dreary Romanian town (i.e., Vasilu) in which busting and punishing three young pot smokers consumes an enormous amount of police department strategizing and man-hours. It’s a fascinating non-thriller — a kind of slow-mo, at times dryly amusing police procedural — that’s essentially a lament about bureaucratic inhumanity and a lack of cultural flexibility in today’s Romania, which is still following the psychology of the Ceausescu era.

I admired and respected Police Adjective enormously. The prolonged static shots — a staple of Romanian cinema — are, as always, fascinating. And the recurrent theme of the particularities of language being perverted and mis-used makes it one of the more thoughtful and ethically grounded films I’ve seen this year. At the same time I can’t say I felt knocked flat by it. A film about the banality and inanity of the Romanian bureaucracy seems…well, less riveting than I wanted or expected it to be, in the end. Sometimes a cigar is just a cigar, Sigmund Freud once said, and sometimes a slow-paced film is just a slow-paced film.

But at the same time it’s more than that. This is a hard one to figure but impossible to dismiss. Not that I (or any reasonably intelligent film fan) would want to. Respect must be paid. Police, Adjective has a certain integrity and a trust in the audience detecting and responding to the political undercurrent that is quite profound, the more I think about it. It has my vote as far that goes. Then again, I took a six-minute bathroom break and didn’t feel I’d missed anything important.