I’ve known Phil Spector‘s musical signature all my life — that “wall of sound” thing that gave such ecstatic echo-phonic oomph to all those early to mid ’60s hits (“Be My Baby”, “Walkin In The Rain”, “River Deep, Mountain High”) and Beatle songs he produced a few years later. But I’d never heard Spector speak or gotten to “know” him until I saw Vikram Jayanti‘s The Agony and the Ecstasy of Phil Spector, which will play the Film Forum from 6.30 to 7.13.

And he’s a fascinating man — there’s no getting around that. A brilliant, oddball X-factor “character” of the first order. I’ve known a few guys like Spector. They’re egotists and half-crazy and it’s always about them, but they’re a trip to talk to and share stories with. If you love show business, you can’t help but love how these guys are always sharp as a tack and don’t miss a trick and are always blah-blahing about their genius and their importance. Except Spector’s blah is backed up by truth. He’s a serious maestro who really did shape and inspire rock ‘n’ roll in its infancy, and who touched heaven a few times in the process.

Okay, so he probably shot Lana Clarkson, a 40 year-old, financially struggling actress, on 2.3.03 when she was visiting his home. Or maybe he threatened to shoot her and the gun accidentally went off. Or whatever. And maybe Spector telling a Daily Telegraph reporter two months before the shooting that “he had bipolar disorder and that he considered himself ‘relatively insane‘” was a factor. And maybe he deserves to be in jail for 19 years. The guy is obviously immodest and intemperate with demons galore.

But you can tell from listening to Spector that he’s some kind of bent genius — that he’s brilliant, exceptional, perceptive — and that it’s a monumental tragedy that these qualities co-exist alongside so much weirdness inside the man — all kinds of strutting-egoist behavior and his having threatened women with guns and all of that “leave me alone because I’m very special” hiding-behind-bodyguards crap. Because life is short and the kind of vision and talent that Spector has (or at least had) is incredibly rare and world-class.

That’s why Jayanti’s film is so absorbing, and why the title is exactly right. Why do so many gifted people always seem to be susceptible to baser impulses? Why do they allow bizarre psychological currents to influence their lives? What kind of a malignant asshole waves guns around in the first place? I’ll tell you what kind of guy does that. A guy who never got over hurtful traumatic stuff that happened in his childhood (like his father committing suicide), and who decided early on that he wouldn’t deal with it. 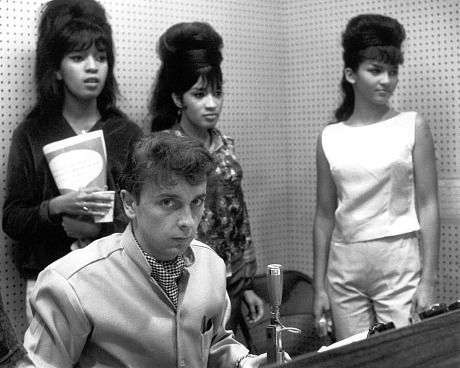 Phil Spector and the Ronettes during a 1963 Gold Star recording session in Los Angeles.

It’s another tragedy that this BBC doc, originally aired in England in 2008, is viewable on YouTube. Perhaps this will affect ticket sales at the Film Forum, or maybe it’s generally understood that you can’t absorb a doc about a music legend unless you see it as a unified big-screen thing with decent sound pumping out of the speakers.

It mainly just needs to be seen, period. Spector’s story encompasses so much and connects to so many musical echos and currents that people (okay, older people) carry around inside, and the way this history keeps colliding with what Spector probably did (despite his earnest claims to Jayanti that he’s innocent) and the Court TV footage and the evidence against him and the thought of a woman’s life being snuffed out…it’s just shattering.

I’m adding Jayanti’s film to my list of the year’s best docs. I’ve seen it twice now and I could probably see it another couple of times. Anyone who cares about ’60s pop music and understands Spector’s importance in the scheme of that decade needs to see this thing. It’s a touchstone trip and an extreme lesson about how good and evil things can exist in people at the same time.

At the same time it’s slightly pathetic that the trailer that the Film Forum site links to is so poorly sized and cropped and has no real focus or intrigue. It doesn’t represent how good the film is. Not even close.

90% of the doc alternates between interviews with the hermetic Spector, taped between his first and second murder trials, and the Court TV footage. But the arguments and testimony are sometimes…okay, often pushed aside on the soundtrack by the hits that Spector produced with the Ronettes, the Righteous Brothers, Ike and Tina Turner, the Crystals, Darlene Love, John Lennon, George Harrison, Bob B. Soxx and the Blue Jeans (that rendition they and Spector recorded of “Zip-A-Dee-Doo-Dah” in ’63). It’s the constant back and forth of beauty and darkness, beauty and rage, beauty and warped emotion — repeated over and over and over.

I never knew that the title of Spector’s “To Know Him Is To Love Him” (which he wrote and performed with the Teddy Bears in ’58) was taken from his father’s gravestone. I’d forgottten that he wrote “Spanish Harlem” — an exceptionally soulful ballad for the 1960 pop market. I never gave much thought to what “Da Doo Ron Ron” meant — I never thought it meant anything in particular — but Spector says it’s a metaphor for slurpy kisses and handjobs and fingerings at the end of a teenage date. Spector also had a good deal to do, he says, with the writing of Lennon’s “Woman Is Nigger of the World.”

There are two curious wrongos. Spector mentions that his father committed suicide when he was “five or six” — he was actually nine when that happened. (How could he not be clear on that?) Spector mentions that line about John Lennon having thanked him for “keeping rock ‘n’ roll alive for the two years when Elvis went into the Army” when in fact Spector’s big period began just after Elvis got out of the Army, starting around ’60 or thereabouts.

Spector mentions that if people like you they don’t say bad things about you, but it’s clear that if he hadn’t been such a hermit and hadn’t acted like a dick for so many years, and if he hadn’t been photographed with that ridiculous finger-in-the-wall-socket electric hairdo, and if he’d just gotten out and charmed people the way he does in the interview footage with Jayanti then…well, who knows? Maybe things might have turned out differently.