Before delivering his opening monologue at tonight’s Golden Globe awards telecast, the joyously judgmental, ironically smart-assed Seth Meyers had better wise up. Because his faux-ironic, nyah-nyah, finger-pointing bullshit is about to get old.

I’m saying this because attitudes have suddenly shifted about the #MeToo beheadings, and about Meyers, whose “Closer Look” essays on Late Night with Seth Meyers have revealed a guy who’s been having the time of his life with the Robespierre-like terror of the last several weeks. Let no one doubt that Meyers has been chowing down on this big-time, and has never indicated the slightest hint of a conflicted attitude about it.

But now he has to indicate this. Even if it pains him. Because the needle on the cultural richter scale has been ever-so-slightly moved by Daphne Merkin‘s 1.5 N.Y. Times op-ed piece, titled “Publicly, We Say #MeToo. Privately, We Have Misgivings.” 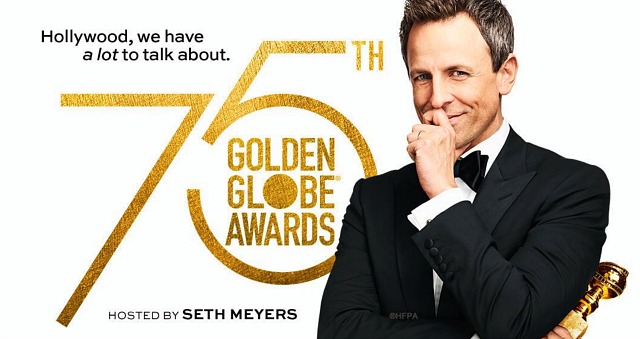 The preying showbiz fiends who’ve made life miserable for so many women for so many years have been disciplined big-time, and there can be no response other than relief that the world is now becoming a kinder, more compassionate and less oppressive place. Predatory dino behavior hasn’t been permanently cancelled, but the perps are scared and hooray for that specific effect.

But other counter-disturbances have happened, and Merkin has put her finger on them.

“You can be sure that this weekend at the Golden Globes, Hollywood celebrities, not exactly known for their independent thinking, will turn the red carpet into a #MeToo moment replete with designer duds,” Merkin begins. “Many have promised to wear black dresses to protest the stream of allegations against industry moguls and actors. Perhaps Meryl Streep will get grilled — again — about what she knew about Harvey Weinstein. The rest of us will diligently follow along on Twitter, sharing hashtags and suitably pious opprobrium.

“But privately, I suspect, many of us, including many longstanding feminists, will be rolling our eyes, having had it with the reflexive and unnuanced sense of outrage that has accompanied this cause from its inception, turning a bona fide moment of moral accountability into a series of ad hoc and sometimes unproven accusations.

“For many weeks now, the conversation that has been going on in private about this reckoning is radically different from the public one. This is not a good sign, suggesting the sort of social intimidation that is the underside of a culture of political correctness, such as we are increasingly living in.”

In my mind the witch hysteria that resulted in the murder of Al Franken‘s Senate career…specks of blood from that beheading are on many hands, but Meyers’ hands are among them.

Meyers will not, I’m reading, have fun tonight with Donald Trump, Michael Wolff and the “very stable genius” thing…whatever. But the #MeToo thing has been affected by a slightly different mindset than existed even a week or two ago, and the voices of cooler heads are starting to be heard.

I would also be thinking twice if I were Rose McGowan, who is surely the Maximilien Robespierre of this movement.