L.A. Times writer Rachel Abramowitz recently did a dual interview with Jack Nicholson and Morgan Freeman about The Bucket List (Warner Bros., 12.25) and various notions related to the film’s subject, which is nominally death but primarily the things that give life value. In so doing she got three good Nicholson quotes about (in this order) life, religion and smoking. 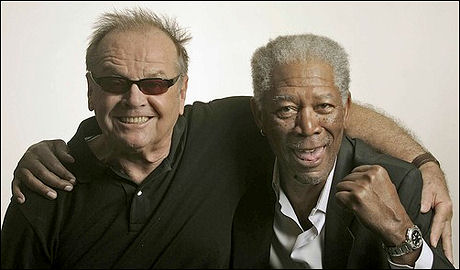 Quote #1: “Because of living a checkered life, I have a lot of different…views about it. Really, what you’d better know is, you’re in the laps of the gods about it all. I’m not an adventurer and a traveler like [Freeman] is…I am kind of a home person that way, and I traveled a lot earlier on in my life, but still there’s plenty of places I want to go to. There are endless things you want to do, books you wanted to read, corners you wanted to clean, this you wanted to get right, that thing you wanted to put right with, it is endless.”

Quote #2: “I’m not anti-religious in any way, but I like ‘The End of Faith’ [by Sam Harris] because they just took Galileo off the heretics list. There are certain areas where I’m not going to challenge anyone’s sense of mystery, but I don’t want reason to be held back by someone’s idea of fundamentalism, and that happens….you can’t go on behaving as though the world is flat.”

Quote #3: “Look, nobody should smoke. It is not so much that you fear that moment when somebody comes in and says, ‘That’s it. You’re dead. You smoked too much.’ Well, that’s not the real fear. The real fear is going through now the process and thinking, ‘I’m dying of stupidity.’ This is the self-recrimination about it.”