“Peter Jackson‘s infatuation with fancy visual effects mortally wounds The Lovely Bones,” writes Daily Variety senior critic Todd McCarthy in what may be the first cut in an onslaught of critical knives. Do howlings winds and heaving seas approach? 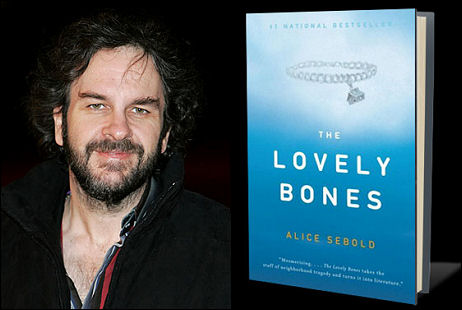 “Alice Sebold‘s cheerily melancholy bestseller, centered upon a 14-year-old girl who narrates the story from heaven after having been brutally murdered, provides almost ready-made bigscreen material. But Jackson undermines solid work from a good cast with show-offy celestial evocations that severely disrupt the emotional connections with the characters.

“The book’s rep, the names of Jackson and exec producer Steven Spielberg, and a mighty year-end push by Paramount/DreamWorks will likely put this over with the public to a substantial extent, but it still rates as a significant artistic disappointment.

“There has been cautious optimism among longtime Jackson followers that this material might inspire him to create a worthy companion piece to his 1994 Heavenly Creatures, which similarly involves teenagers and murder in an otherwise tranquil setting and remains far and away his best film.

“The potential was certainly there in the book, which reminds of Dennis Lehane‘s successfully filmed novels Mystic River and Gone Baby Gone in its devastating emotional trauma, but offers the distinctive perspective of the most entirely plausible omniscient narrator in modern literature.

“Unfortunately, the massive success Jackson has enjoyed in the intervening years with his CGI-heavy The Lord of the Rings saga (the source of which receives fleeting homage in a bookstore scene here) and King Kong has infected the way he approaches this far more intimate tale. Instead of having the late Susie Salmon occupy a little perch in an abstract heavenly gazebo from which she can peer down upon her family and anyone else — all that is really necessary from a narrative point of view — the director has indulged his whims to create constantly shifting backdrops depicting an afterlife evocative of The Sound of Music or The Wizard of Oz one moment, The Little Prince or Teletubbies the next.

“It’s a shame, because the first half-hour or so suggests that Jackson, had he taken a vow to keep it real and use not a single visual effect, still has it in him to relate a human story in a direct, vibrant manner.”

“When it sticks to the everyday neighborhood inhabited by its characters, The Lovely Bones, which was shot on Pennsylvania locations and in New Zealand studios, finds a reasonable equilibrium between drama and production values. When it ventures beyond it, heaven turns into Hades.”