James Joyce Turns In His Grave

I didn’t pay attention to my invite for the Grownups 2 all-media, and therefore missed the fact that it screened at 5 pm instead of the usual 7 or 7:30 pm. So I missed out — big loss. The movie apparently smells, but Andrew Barker‘s Variety review (“Among the slackest, laziest, least movie-like movies released by a major studio in the last decade”) is a classic. It’s probably funnier than the film. 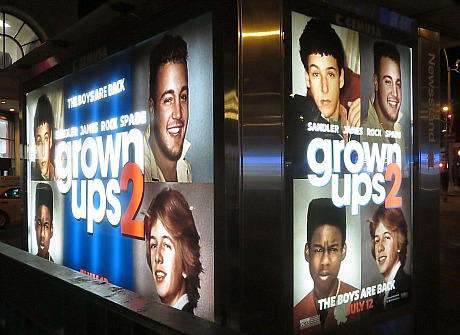 “The first scene in Grown Ups 2 depicts a deer urinating directly onto Adam Sandler’s face. The penultimate scene (spoiler alert) depicts the very same deer apparently castrating Taylor Lautner. These bookends are not only the film’s highlights, they also represent the closest it comes to establishing any sort of narrative throughline. Grown Ups 2 is perhaps the closest Hollywood has yet come to making ‘Ow! My Balls!’ seem like a plausible future project. It is all but guaranteed a strong opening weekend.”

That last sentence sums up the current Hollywood malaise in a nutshell.

“A follow-up to 2010’s critically savaged yet massively lucrative Grown Ups, this sequel barely attempts to function as a piece of narrative filmmaking at all, almost immediately devolving into a hash of frantic, random incidents strung together with the slimmest sliver of coherence.

Like Mrs. DallowayUlysses, Grown Ups 2 unfolds entirely within the span of a single day; in this case, the last day of school in a small Massachusetts town. Like Ulysses — though unlike Mrs. Dalloway — it features plentiful flatulence, and James Joyce might well have appreciated the neologism ‘burpsnart,’ which describes Kevin James’ character’s ability to burp, sneeze and fart simultaneously.

“Whether [Joyce] would have appreciated seeing this trick repeated no less than five times is an enigma for the ages, though the sheer amount of pissing, vomiting, ear picking, crotch sniffing, man-on-dog tongue kissing and belly-button lint eating that the film contains would surely push anyone over the edge.”