The first of two New York Film Festival shorts by the great Jamie Stuart appeared today on the Filmmaker website. The short is very “Stuart” (cryptic, sardonic, superb editing), but I can’t figure what’s being “said.” The basic suggestion seems to be that Darjeeling Limited director and co-writer Wes Anderson is some kind of visitor from from another planet. Stuart seems to convey this, at least, by showing us a close-up of Anderson’s face (wearing a pleasant, unguarded expression) while we hear some kind of variant of 1950s electronic space music. 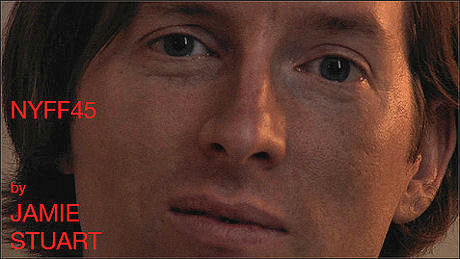 Then the piece goes back to Stuart’s Brooklyn pad (his roommates, telephone calls…whatever). The N.Y. Film Festival stuff doesn’t begin until the one-third mark. We see the Darjeeling Limited cast sitting on the dais after the press screening (which happened, I believe, a good week ago), and notice that costar Jason Schwartzman no longer has a black caterpillar on his upper lip. But the ’50s space music half-dominates — no matter what’s being said or narrated, we keep hearing this “eeeeOOWWWohhhhhhweeeeeee.”

Cut to Anderson, wearing an elegant white suit (which probably cost at least $2500), talking at first about creating an animated film — The Fantastic Mr. Fox, he means, which will be distributed by 20th Century Fox in November 2009. Then he starts talking about watching a DVD of a Louis Malle film called Le Feu Follet (’63), but without English subtitles. Anderson says he doesn’t understand a word because doesn’t speak French. He says he’s been trying to learn French but he’s found it difficult so far. And that’s pretty much it.