Speaking of Peter Falk, the following is a true story, witnessed first-hand by myself: It was ’83 or ’84, and I was in a quality hardware store on a Saturday afternoon somewhere in deep Hollywood. And suddenly I heard laughing and joshing coming from two or three guys standing around the checkout counter, which was just out of sight. Then I heard some guy say, “Heyyy…detective!” with the other guys laughing like he’d just said something truly brilliant and inspired. 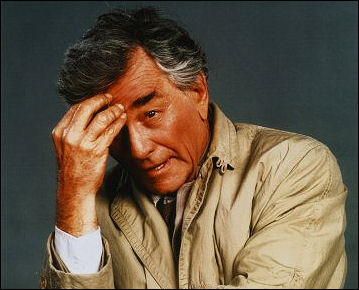 And then I saw Falk coming down the aisle next to mine, angry and exasperated at being ribbed in such a coarse and lunkheaded way. He said “Jesus!” at least twice, although it may have been three times. He said it with a mixture of agony and disbelief, as if to say “these assholes are unbelievable…really fucking unbelievable” And the chowderheads who were Colombo-ing him didn’t give a damn how rude they were being or how stupid they were making themselves look. All they knew or cared about was that Detective Colombo was in their midst and they were going to have fun with this while it lasted. They were like children having fun heckling a gorilla in a cage at a zoo.
There are guys like this all over, in every country. But the guys like this who live in Pennsylvania will probably be voting for Clinton or McCain.