If a movie is bad in an altogether grand-sweep way, it is also bad in hundreds of small particular ways. Quentin Tarantino‘s Inglourious Basterds, which is going to choke and die when it opens on 8.21, is such a film. I didn’t think very much of it after seeing it at Cannes — I mainly complained that it’s too long-winded — but I caught it a second time last night and it really didn’t go down well.

Spoiler whiners are hereby warned to stay the hell away because I’m going to spoil the hell out of a certain scene that happens in the first act. Not a crucial scene in terms of plot turns, but one that exposes the Basterds game.

Inglourious Basterds, as costar Eli Roth and others have stated, is basically a World War II Jewish payback movie in which all kinds of brutal and sadistic killings of Germans (be they troops, officers or members of the Nazi elite and/or high command) are presented as not only righteous but delicious because “them Nazis,” in the parlance of Brad Pitt‘s Lt. Aldo Raines, are viciously anti-Semitic and deserve it all to hell.

I began hating Inglourious Basterds for the boredom (which is to say the repetition and the banality of making a movie about a cruddy ’70s exploitation movie and self-consciously smirking about this movie-ness from start to finish) and the acting (which is mostly wink-wink “bad” in a kind of ’70s grindhouse way) but mainly for something that didn’t hit me when I first saw it three months ago. I realize it’s a Quentin movie that’s basically about Quentin’s bullshit, but — I’m trying not sound like a rabbi here — Inglourious Basterds reeks of arrogance and sadism and indifference to the value of human life.

It’s a movie in which brutal death happens every which way, and by this I mean stupidly, callously, carelessly, plentifully. I began to hate it early on for the way it takes almost every character down (including ones Tarantino appears to favor) with utter indifference. Kill this one, kill that one…this is too much fun! Especially since we’re doing it to the Germans, who did what they did to the Jews. Shoot ’em, beat ’em, burn ’em, strangle ’em, roast ’em….yeah!

I hated it, in short, because it doesn’t give those German pigs a fair shake. I hated it because it has the same attitude about those damn Nazis that the damn Nazis and the other anti-Semites had about the Jews in the lead-up to the attempted implementation of the Final Solution. As Shepherd Wong says in Woody Allen‘s What’s Up Tiger Lily, “Two wongs don’t make a wight.” 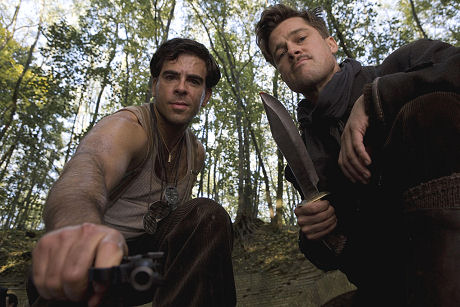 I know, I know — a film that wink-winks its way through an arch movie-movie landscape can’t be faulted on moral grounds because it’s not playing with any kind of real-world cards. That’s a fool’s rationale. There’s no such thing as pure off-the-ground fantasy. All movies are tethered to some kind of world view that takes stock of the way things are outside the realm of make-believe. And the reality of this movie is basically a result of Tarantino having divorced himself so totally from making films about real life in favor of movies-about-movies that he’s drawing upon nothing except cool-cat attitude and smug satisfaction and fair-weather-friend (i.e., Harvey Weinstein‘s) flattery.

Tarantino has stuck his finger up his ass and given it a good sniff and smelled lilacs and gardenias so many times that he’s lost his mind, which is to say he’s lost whatever sense of proportion he may have once had about the relationship between free creative imaginings (which he’s obviously had a rollicking good time with in years past) and the way life actually is when you get dressed and put your shoes on and get in your car and put the key in the ignition and deal with the situation.

Inglourious Basterds is proof that QT has gone batshit crazy in the sense that he cares about nothing except his own backyard toys. He’s gone creatively nuts in the same way that James Joyce, in the view of some, crawled too far into his own anus and headspace when he wrote Finnegans Wake. (With no apostrophe between “n” and “s.”) All I know is that this is a truly empty and diseased film about absolutely nothing except the tip of that digit.

The scene in which it all starts to smell rancid is one in which Pitt and the Basterds — a ragtag group of Jewish soldiers conducting guerilla-style search-and-destroy missions throughout German-occupied territory — interrogate a captured German soldier. He is Sgt. Werner Rachtman (Richard Sammel), who appears in the above trailer starting at the 16 second mark and exiting at 48.

The bottom line is that Pitt and Roth, who plays Sgt. Donnie Donowitz (a.k.a., ‘the “Bear Jew”), behave like butt-ugly sadists in this scene while Sammel behaves like a man of honor, character and dignity. 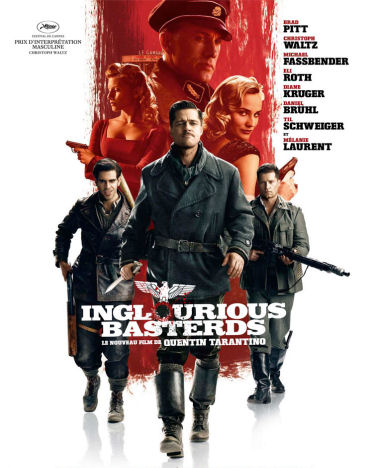 Tarantino has Sammel defy Pitt by saying “fuck you and your Jew dogs” so it’ll seem right and fair that an anti-Semite gets his head beaten into mashed potatoes with a baseball bat. But what speaks louder is (a) Sammel’s expression, which is clearly that of a man of intelligence and perception, (b) his eyes in particular, which have a settled quality that indicates a certain regular-Joe decency, and (c) his refusal to give Pitt information about nearby German troops that would lead to their deaths if he spilled.

Isn’t this is what men of honor and bravery do in wartime — i.e., refuse to help the enemy kill their fellow soldiers, even if it means their own death?

Compare this anti-Semitic but nonetheless noble fellow with the smug and vile Pitt, who does everything but twirl this moustache as he contemplates the delicious prospect of seeing blood and brain matter emerge from Rachtman’s head.

And then comes a protracted and tedious build-up in which we hear Roth’s baseball bat banging against the stone walls of a darkened tunnel as he approaches the daylight and Sgt. Rachtman, who is kneeling next to Pitt. Whack, whack, whack, whack. Forever, interminably. Only a director who has truly lost his bearings would make an audience listen to that sound this much — 14, 15 times. And then Roth finally comes out of the tunnel and beats Rachtman to death. And then he screams and shouts with joy, going all “whee!” and “yeah!” and “all right!”

This is one of the most disgusting violent scenes I’ve ever sat through in my entire life.
Morally disgusting, I mean.

It didn’t make me want to see the Inglourious Basterds Germans come out ahead, but after this point I felt nothing for Pitt and his boys except loathing. All I knew is that they’re scum and that if they wind up dying, fine. No skin off mine. I don’t think this is the reaction Tarantino was looking for. I’m a Martian, I realize, and it’s quite possible that most viewers of this film are going to be cackling and giggling along with Pitt and Roth, but maybe not. Either way it’s not going to make anything after the first weekend.

If you half-liked and half-disliked Basterds the first time, my advice is to let well enough alone and don’t see it again because it’ll totally fall apart. You’ll be moaning and writhing in your seat like me. I tried to keep it down, but Jett told me later on that I was over-the-top with it.